US Analysis: Trump Is Symptom of America’s “Decline” Crisis 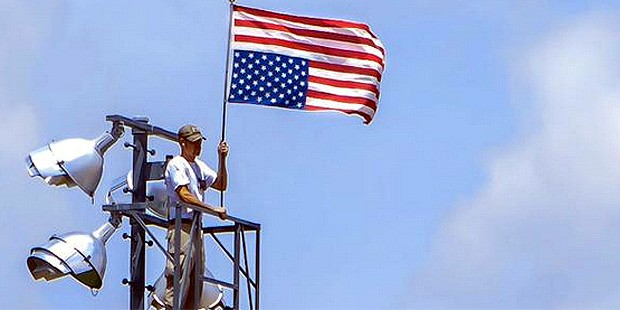 PHOTO: Man in Arizona stands with an upside-down US flag, a sign of distress, May 2015

Liam Kennedy of our partner The Clinton Institute writes for The Conversation:

A visceral sense of domestic decline is coursing through contemporary American culture and politics – and it’s become one of the central themes of this year’s presidential campaign. Donald Trump in particular has used it to stoke the inchoate anger of his supporters, telling them: “Our country is falling apart. Our infrastructure is falling apart….Our airports are, like, third world.”

And paradoxically, even as Trump laments the US’s decline, leading pundits are pointing to his remarkably successful insurgency as evidence of the same phenomenon. Andrew Sullivan, describing the election campaign as “dystopian”, argued that “America has never been so ripe for tyranny.“ He concluded: “In terms of our liberal democracy and constitutional order, Trump is an extinction-level event.”

But while they certainly have a deep resonance today, dramatic lamentations of American decline have a long history. Ever since the founding of the nation, Americans have gone through bouts of self-doubt, struggling to come to terms with national and global crises both real and perceived. American political culture is shot through with the theme of decline followed by regeneration, a distinctive pattern that helps frame the idea of American exceptionalism.

Political leaders frequently invoke this dynamic in their rhetoric, although usually to paint a picture of regeneration. Pessimism is not often rewarded. Jimmy Carter’s notorious “crisis of confidence” speech in 1979 may have been meant as a bold admonition to the nation to pick up its spirits, but its dour attempt at straight talk was no match for Carter’s sunnier successor, Ronald Reagan, who was re-elected by a landslide in 1984 as he declared it “morning again in America”.

Of course, Trump is trying to play both sides of the dialectic, invoking decline while promising to make America great again. But he is far from the original author of this discourse. It’s an ancient idea, and it reaches deeply into the nervous system of the body politic and shapes perceptions about American identity.

For some, America’s decline is writ largest in a domestic crisis of liberal-democratic citizenship, a fracturing or unraveling of civil society and atomization of the populace. The political scientist Robert Putnam famously drew attention to this in 2000 when he argued that Americans were increasingly “bowling alone” rather than participating in civic life as they once did. There have been many echoes of his thesis in recent commentaries on a diminution of associational and communal experience in the US.

The journalist George Packer has described an “unwinding” of the nation:

In the space of a generation, [America] has become more than ever a country of winners and losers, as industries have failed, institutions have disappeared and the country’s focus has shifted to idolise celebrity and wealth.

Though short on solutions, Packer’s diagnosis resonates deeply – the game is “rigged”, the social contract “shredded”.

The hollowing out of the American middle class is not only an economic reality, but a matter of psychological malaise. Disintegration of the civic fabric means the loss of support networks to help people manage challenging economic transitions and feeds into the sense of disinheritance and declining expectations expressed by many Americans and particularly by less educated, middle-aged white Americans. Recent discussions of rising death rates among this cohort have suggested an “undiagnosed pathology” among people who feel “left behind”.

Perhaps most insidiously, discussions of urban poverty and disorder often use the narrative of across-the-board decline to explain very specific, entrenched forms of inequality and injustice. From the deaths of African-American men at the hands of police in Chicago, Ferguson and elsewhere, to the water crisis in Flint, there is abundant evidence of structural violence and neglect, and of the undervaluing of black lives.

A sense of an ending

This civic crisis is mirrored by political sclerosis. Poisonous ideological division has not only brought Washington to a standstill, but gripped the body politic more broadly. There are limited options to remedy problems of accountability – all fuelling an uptick in political nihilism.

So is this current bout of declinism substantively different from earlier ones? Does it match real, enduring changes to the American system or worldview? Clearly, the political parties’ elites are deeply worried, and see or sense a seismic shift in the order of things.

The GOP always had internal tensions….What is happening now is bigger and less remediable in part because the battles in the past were over conservatism, an actual political philosophy. We are witnessing history. Something important is ending.

While Democratic leaders have generally been more sanguine about ideological turmoil, they too are anxious about what they see as a capricious electorate and the erosion of a political centre. Bernie Sanders’ insurgent campaign not only reflects deep scepticism on the liberal left with politics as usual but also taps into the more general discontents that have energised Trump’s campaign.

President Obama felt a need to speak to the theme of decline in his final State of the Union address:

Throughout much of his presidency, Obama has been in the awkward political position of managing a nation’s diminished expectations. Of course, one would expect a sitting president to repudiate the claims of national decline under his watch, but Obama’s words make plain that he understands the anxieties at work.

Still, the current bout of declinism is a serious wake-up call. America’s political system and the sensibilities of the populace are desperately out of sync – and at some point, there will need to be a realignment of relations between the individual, the state and the market, and a re-balancing of rights and responsibilities.

The US’s capacity for regeneration should not be underestimated, but as the Trump surge indicates, the American polity’s growing tribalization and the country’s toxic political and social climate are symptoms of a deep malaise. It may be some time before it’s morning again in America.