Iran Daily: Rouhani “Regime Critics Should Not Be Imprisoned” 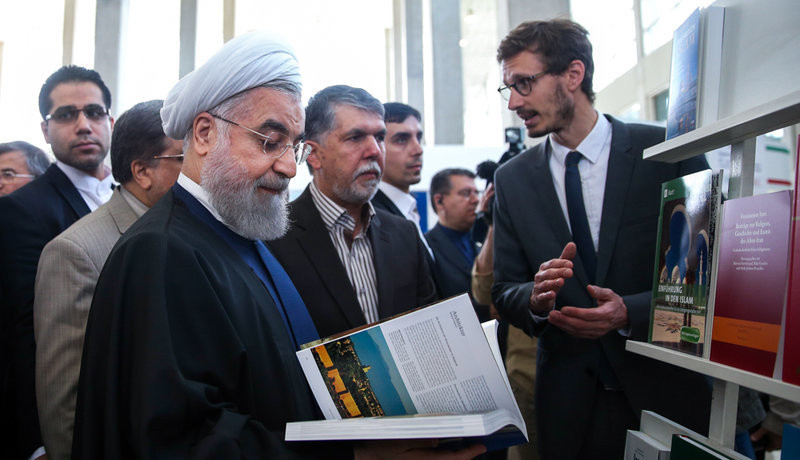 In a pointed intervention in the Iran regime’s in-fighting over political and cultural space, President Rouhani has said that critics should not be imprisoned or prevented from publishing their views.

Rouhani called for greater freedom of expression during a speech at the Tehran International Book Fair on Tuesday, which was World Press Freedom Day:

A critic is a blessing. Of course, someone should not be insulting while pretending to be a critic. But those who criticize should not get their work mired in a maze of paperwork [to get published]. Critics should not be sent to prison.

The President has been in a running battle with hardliners who have said that the Government is weak and allowing “sedition”, with the continuing campaign — led by the Revolutionary Guards — to impose long prison terms on journalists and activists. Rouhani said last year, “One cannot take people to heaven through force and a whip”, and he renewed the comments last month.

In an open letter to Rouhani, 230 journalists called on him to investigate the cases of imprisoned Iranian journalists, including four media personnel sentenced last week to 5 to 10 years in prison:

You are our President, and we voted for “Hope and Prudence” [Rouhani’s 2013 campaign slogan] so that we would have the Supreme Leader’s command of “maximum attraction and minimal repulsion”, not the other way around.

There have been mixed signals this week about the fate of the detained journalists. The mother of one of the four recently-sentenced media personnel, journalist Afarin Chitsaz, said that her daughter had been beaten during interrogation before she was given her 10-year prison term. However, cartoonist Atena Farghadani, who had been sentenced to 12 years for a drawing of MPs as animals, was released on Tuesday after 18 months.

On the political front, the Government said it would fight the Guardian Council’s disqualification of a reformist elected to Parliament on February 26.

Both senior Presidential advisor Mohammad Baqer Nobakht and leading reformist Mohammad Reza Aref, a likely candidate for Speaker of Parliament next month, repeated the President’s call for Parliament to review the case of lawyer Minoo Khaleghi, who was chosen by the voters of Esfahan.

Nobakht said that “legal disagreements exist between the administration and the Guardian Council” and that the Interior Ministry is “taking action”over the case.

While the Guardian Council disqualified thousands of candidates before the elections — in an unsuccessful attempt to limit the gains of the centrist-reformist List of Hope — its ban on Khaleghi over a supposed lack of qualifications was outside the post-election timeframe for any bans.