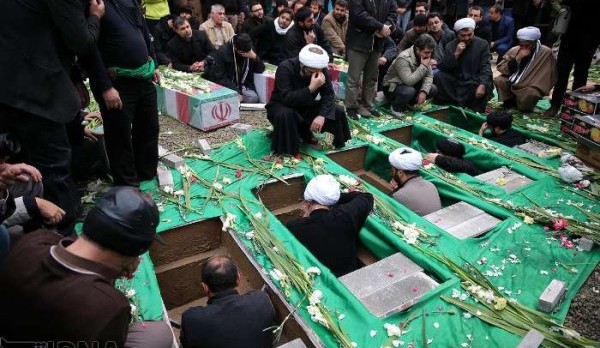 The Revolutionary Guards have acknowledged 13 deaths and 21 injuries from the battle south of Aleppo, but have not admitted any captured troops.

The site proclaims that that “at least 60 terrorists were killed and many more were wounded in a joint offensive of the Syrian Army troops and the Lebanese Hezbollah fighters”.

There is no evidence for the claim apart from the assertion of “army sources”, who also said that the regime-Hezbollah assault “destroyed the group’s military hardware in large scale”.

Fars declares that “at least 400 terrorists were killed or wounded in the pro-government forces’ offensives in the Southern part of Aleppo province in the last two to three days”.

The article tries to cover up the loss of Khan Tuman last Thursday, and the subsequent failure to retake it with the assurance of the “sources” that “the government forces are carrying out their operations in Khan Tuman battlefield step by step”. However, it effectively admits that the attacks have not made any advance, saying that they “prevented” the rebels and Jabhat al-Nusra from moving towards neighboring villages.

The article then maintains that Khan Tuman was never lost: “Government forces say they are still in charge of key centers and blocks in the town.”

Fars also lies about the Syrian regime’s loss of gas fields in central Syria to the Islamic State, asserting:

The Syrian Army troops alongside popular forces pushed the ISIL [Islamic State] terrorists back from more territories near two main oilfields in the Eastern part of Homs province.

The ISIL left behind tens of the dead and wounded members and fled its strongholds near al-Sha’er and al-Maher oilfields under the heavy offensives of the Syrian government forces.

The Islamic State took the al-Sha’ar gas field on Wednesday, seizing regime armored vehicles, weapons, and ammunition, and ISIS moved into the al-Maher fields on Sunday.

Rezaei, a major-general of the Revolutionary Guards and a Presidential candidate in 2013, used an Instagram post to blame Saudi Arabia, Israel, and Turkey for backing the rebels and Jabhat al-Nusra — “Takfiri militants” — who captured the key town of Khan Tuman, killing and wounding dozens of Revolutionary Guards troops.

I promise you that the Takfiris, who are agents of the Zionist regime, will pay dearly for the attack. Undoubtedly, the final victory will belong to the Resistance, government and nation of Syria.

The official paid tribute to the “heroes”, all from Iran’s northern province of Mazandaran, who were casualties.

The Secretary of the National Security Council, Ali Shamkhani, also promised retaliation while adding the US to the list of those responsible for the Iranian defeat:

Iran and its allies – Russia, Syria, and Hezbollah – will not leave the recent incidents in Aleppo unanswered….

What happened there was the purposeful abuse of goodwill by breaking a ceasefire in Aleppo’s public areas. Americans, their regional allies, and terrorists are implicated in the incident, through their continuous logistical support.

Shamkhani also questioned the cessation of hostilities, even though it was broker by Iran’s ally Russia:

When the ceasefire plan was proposed, the Islamic Republic of Iran was not opposed to its principles, but believed that it had structural deficiencies.

The Khan Touman incident has demonstrated that the concerns raised by Iran were totally correct, and were based on the realities of the warzone. [We believed that] the ceasefire would just be an opportunity for the state-sponsors of terrorism to reinforce the militant groups.

For the first time, the Revolutionary Guards acknowledged significant losses last week. A spokesman said 13 troops were killed and 21 wounded as Syria’s rebels and the jihadists of Jabhat al-Nusra captured Khan Tuman, a key town near the Aleppo-to-Damascus highway.

Iranian media have reported the deaths of more than 250 commanders and troops since last October when Iran escalated its military intervention, accompanying Russian airstrikes and leading ground offensives. However, the reports have largely been based on coverage of funerals rather than any Guards announcement of multiple casualties.

On Sunday, the Guards tried to turn attention away from their losses by creating stories in their outlet Fars News about the battle for Khan Tuman, about 12 km (7 miles) from Aleppo city.

Fars claimed that “Al-Qaeda-affiliated websites confirmed…that 30 more of their militants were killed and 12 others were wounded” in fighting with forces supporting Syria’s Assad regime. It said more than 100 missiles were fired on rebel positions, which “forced a large number of Jaish al-Adl terrorists to withdraw from the region”.

In fact, despite Russian and Syrian regime airstrikes and a possible ground attack, there were no such reports of any losses among rebels or Jabhat al-Nusra. Nor was there a withdrawal, especially of Jaish al-Adl — which is an insurgent group based on the Iranian-Pakistani border, far from Syria.

Instead, Syria’s rebel bloc Jaish al-Fateh said that it killed more than 50 pro-Assad fighters attacking Khan Tuman on Sunday, and that it destroyed four armored vehicles.

Still, Fars presses ahead, “The Syrian Army announced a few minutes ago that its troops and their allies…seized control over more territories near Khan Tuman following several hours of non-stop battle.”

There is no such announcement on the English-language site of Syrian State media this morning.

A charity worker with dual Iranian-British citizenship is being held in solitary confinement in Iran.

Revolutionary Guards arrested Nazanin Zaghari-Ratcliffe on April 3 as she was visiting her family. An unnamed Iranian official told her parents that she was being held in connection with threats to national security.

Zaghari-Ratcliffe said to her parents that she had been forced to sign a confession under duress. She has been taken to Kerman Province, about 1000 km (620 miles) from Tehran, and she has not been allowed to see the family lawyer or her 22-month old daughter, who was with her in Iran.

“Nazanin had been to Iran many times to visit family and had never had any problems,” said her husband, Richard Ratcliffe. “She has never been afraid to travel to Iran and her family has never had any trouble. They are quiet people.”

He added, “There aren’t even any charges,” he said. “It’s just so baffling and difficult to understand. We don’t know what to think.”

The Statistical Centre of Iran has reported that youth unemployment reached 26.1% in the last Iranian year, which ended March 19, 2016.

Iran has carried out another test on a medium-range ballistic missile.

Despite January’s implementation of a July 2015 nuclear agreement, the US has imposed new sanctions on Iran over the testing.

Washington and its European allies say the launches violate a UN resolution passed at the time of the nuclear deal. Tehran says the resolution does not apply because the missiles are not designed to carry nuclear warheads.

The US has also said that it will take the matter to the UN Security Council.