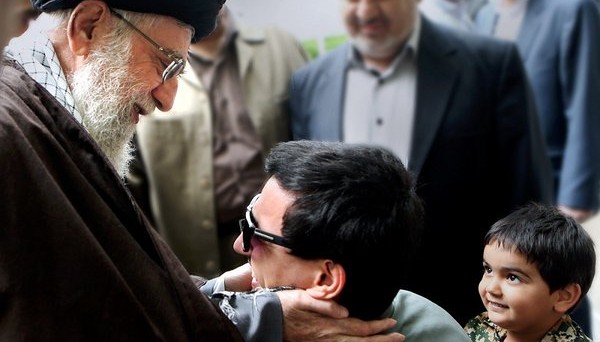 Iran’s Supreme Leader used a speech on Wednesday to declare full support for Lebanon’s Hezbollah, amid both the Syrian conflict and last week’s denunciation of Tehran and Hezbollah by the Organization of Islamic Cooperation.

Addressing students in Tehran, Ayatollah Khamenei combined the support with a challenge to Saudi Arabia, seen as the driving force behind the OIC communiqué condemning Iranian and Hezbollah “terrorism”:

Despite abundant practical and propaganda threats, today the Lebanese Hezbollah is showing its upright and vigorous body in the Muslim world. Its condemnation in a torn paper by a corrupt, dependent, hollow and futile government does not matter at all.

#Hezbollah is an honor for world of #Islam. Now does it matter if a worthless piece of paper condemns Hezbollah? #OIC

Citing Hezbollah’s war with Israel in 2006, he asserted, “Hezbollah and its faithful youth are shining like the sun and are a source of honor for the Muslim world.”

Along with Iran, Hezbollah is providing essential military support to the Assad regime in Syria’s five-year conflict. Tehran and Hezbollah have escalated the intervention in recent weeks, taking the lead on frontlines, putting in more troops and special forces, and commanding foreign militia.

In another public endorsement of the Iranian intervention, with at least 232 deaths of commanders and troops acknowledged by Iranian media since October 7, the Supreme Leader honored a soldier blinded in operations in northern Aleppo Province last autumn.

Leader gives his ring as gift to disabled veteran defender of shrines who lost eyes in #Nubl and #Zahraa freeing op. pic.twitter.com/KR7zRYST2m

Iranian forces were significant in the pro-Assad advance, enabled by Russian airstrikes, that reached the enclaves of Nubl and al-Zahraa, north of Aleppo city. However, this month Iranian-led forces have suffered defeat at the hands of rebels and the jihadists of Jabhat al-Nusra, who have reclaimed territory south of Aleppo.