UPDATE 1700 GMT: The Supreme Leader has maintained the pressure over the nuclear deal and foreign policy, telling senior officials that the US and its partners are unreliable:

We cannot trust the Americans, and besides the Americans, some other Western governments are like that. Therefore we have to rely on our own capabilities and the American officials’ positions and performance endorse such a view.

Emphasizing self-sufficiency, he chided the Government to heed his declaration of “Resistance Economy” “Production in both industrial and agriculture sectors must be given serious attention.”

Ayatollah Khamenei said “empathy and rapport and unity” among officials will prepare the ground for the realization of the resistance “Without cooperation among officials, [country’s] affairs will not go ahead.” 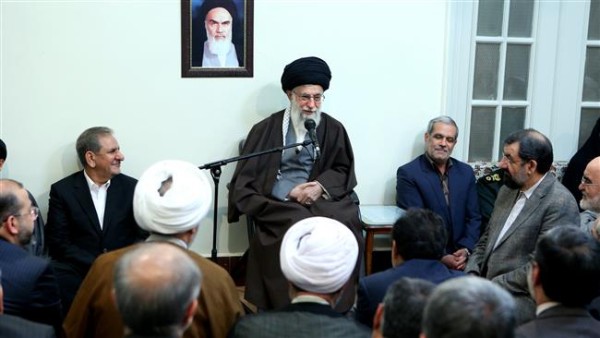 ORIGINAL ENTRY: In its most serious challenge since the July 2015 nuclear deal, Iran’s Islamic Revolutionary Guards Corps have turned against the agreement and the Rouhani Government.

The commander of the Guards, General Mohammad Ali Jafari, criticized the Joint Comprehensive Plan of Action in an address to officers on Tuesday. He also confronted President Rouhani, who has proclaimed that the JCPOA will be followed by a “JCPOA 2” for economic recovery amid the lifting of US and European Union sanctions:

What achievements has the first JCPOA brought that should make us look towards other JCPOAs?….Individuals who speak today about a series of JCPOAs are unknowingly moving down a counter-revolutionary path.

#Iran's #IRGC commander: If the nuclear #JCPOA is considered as a model, that is the indication of narrow-mindedness & self-humiliation.

The IRGC have long been sceptical of any nuclear agreement with the US and other powers. They were concerned about the limitation of military capabilities and the threat to their extensive interests in Iran’s economy.

But the Guards were constrained in their challenge by the Supreme Leader’s support for the negotiations. Jafari’s last significant speech against the deal was in November 2014, as Iran and the 5+1 Powers pursued conversion of an interim agreement into lasting arrangements. Eight months later, the JCPOA was confirmed, and its implementation was announced in January 2016.

A New Opportunity for IRGC

However, Ayatollah Khamenei has now opened the door for a pushback against the Government. Always hostile to the US Government, the Supreme Leader began issuing statements in March expressing his concern about American failure to return Iranian assets and lift restrictions on financial and banking sectors.

There are of course some inside Iran who believe in and accept this moving discourse of the arrogance system and who try to convince others as well.

They believe Middle East or domestic problems can be solved by JCPOA 2 and 3. This means giving up principles and red lines and yielding to the arrogance.

The Supreme Leader indicated that the Government’s economic policy — the trump card for Rouhani’s authority in the Iranian system — would be under close scrutiny, as he announced that the Iranian year would be “Resistance Economy: Action and Implementation”.

Since Khamenei’s announcement, a series of senior Iranian officials have denounced the US and warned against Rouhani’s foreign policy of “engagement”. Their statements have been assisted by Washington’s actions, including new sanctions of Iranian companies and individuals over ballistic missile testing.

“A Decisive Victory Against Enemies”

Jafari emphasized confrontation in his speech on Tuesday:

We have been building up our power for years based on the presumption of a widespread war with the United States and its allies. We have dedicated all of our capabilities and capacities for a decisive victory against such enemies.

The commander indicated the IRGC’s readiness for a prolonged political and economic battle, as he launched a further attack on Rouhani and his allies, who gained strength with centrist-reformist success in February 26 elections for Parliament and the Assembly of Experts.

Jafari praised the Islamic Republic for its ability to withstand “crises” including “war, terrorism, sanctions, the 1388 [2009] sedition, and political developments like the coming to power of a government like the Reformist administration [of President Mohammad Khatami between 1997 and 2005] and a Parliament like the sixth Parliament [of 2000-2004].”

We will support the survival of the Syrian regime, sovereignty, and territorial integrity. We will never permit the disintegration of even one of the Islamic lands….We will never abandon the people of Palestine and Yemen.

State Department: We Are Not Giving Iran Access to Dollar Transactions

A senior State Department official told US legislators on Tuesday that the Obama Administration is not planning to give Iran access to the American financial system or to use of the US dollar for
transactions.

“The rumors and news that have appeared in the press [about allowing some access]…are not true,”
Under Secretary of State for Political Affairs Thomas Shannon told the Senate Foreign Relations Committee.

The Supreme Leader and other Iranian officials have portrayed the US refusal as a failure to observe the July 2015 nuclear deal. However, American critics of the agreement have accused the Obama Administration of willingness to make another “concession” to the Islamic State with allowance of some dollar transactions.

Undersecretary of State Shannon denied any consideration of the transactions, implying that they were beyond the nuclear agreement’s provision for sanctions relief: “We would argue that any effort to step away from [the deal] would reopen a Pandora’s Box in that region
that we do not think we could close again.”

Later Tuesday, White House spokesman Josh Earnest denied preparations to reinstate “U-turn” authorization, which would allow foreign banks to use the US financial system to transfer funds for some Iran-related trade.