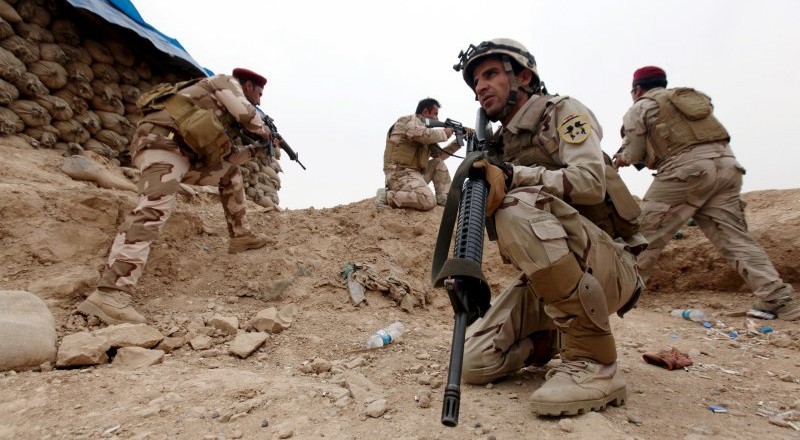 Writing for The Daily Beast, Wladimir Van Wilgenburg describes the failure last week of the Iraqi Army’s first operation to advance on Mosul, captured by the Islamic State in June 2014:

At first, Iraqi soldiers involved in an operation to capture villages close to Mosul on Friday were in good spirits. “Allah Akbar” (“God is Great”), they shouted, after they hit an alleged Islamic State suicide bomber with US-provided mortars. But just one hour later many of them fled, fearing ISIS would strike back.

Early in the day, there were already signs of trouble. A sergeant named Hussein from the artillery battalion told The Daily Beast, “There has been some delays in what we expected, but it’s mostly because of their heavy use of sniper fire and of IEDS. We have not been really advancing today, but that is not part of our plan as of yet, but in coming hours, we are planning to move forward.”

The first challenge was to capture the strategic little village of Nasr that would open the road for the Iraqi military to take the rest of the area. The ultimate short-term aim is to cross the Tigris River and take Qayarrah. This would open the road to the city of Mosul for future operations.

But the combat around Nasr did not go well. ISIS “left the village, and came back after a few hours”, said one tired Shia Arab fighter named Mohammed who is part of the Shia-led Hashid Shaabi militia forces. He was angry at the Iraqi army, and the lack of US air support after returning from the fight. “There were no airstrikes, where are the airstrikes?” he complained.

On Thursday, when the operation began, airstrikes could be seen hitting ISIS positions, but the cloudy weather and the lack of US forward air controllers apparently prevented U.S aircraft from carrying out strikes on Friday.

“The operation continues according to the plan. Only the weather conditions are not good,” said an Iraqi colonel, who refused to talk on the record:

If God wills it, everything will go to plan. The ISIS fighters are just depending on IEDs, and booby-trapped houses, there is no real confrontation. We are just dealing with bombs and snipers.

There are no civilians, in the area.

It was stunning to see how quickly the mood changed on the battlefield.

Early in the day, Iraqi soldiers led by the commander of the Nineveh operations, Lieutenant General Najim al-Jibouri, seemed to be in high spirits, dancing traditional dances, and preparing to move out with Humvees into the village of Nasr.

“Our morale is very high, we are just waiting for the order from the commander. We have weapons. We are fighting terrorists. They have no morals, and no goals,” Iraqi soldier Hussein Samij from Diwaniyah province told The Daily Beast.

“As soon we get orders to really advance, we can get there in two days to Qayarrah,” he added.

When their artillery struck something that created a huge explosion inside Nasr, Jibouri and his men shouted with joy. They thought maybe they’d hit an ISIS suicide bomber. General Jibouri looked with his binoculars over the trench to see the result of the artillery, and it seemed he already thought he achieved victory over ISIS militants in the village.

Yet one hour later, his men were not so joyful, when most soldiers ran in panic, fleeing in their Humvees, fearing ISIS mortar attacks. Just a few of his men, including the artillery officers, stood their ground.

This seems to be exactly the biggest problem for the Iraqi army: the lack of morale. One week ago Iraqi soldiers abandoned their base, which forced the United States to send in more Marines in support, and one of them was killed. Again this time, Iraqi army soldiers almost completely deserted their positions, fearing an ISIS response to their artillery when, in reality, not one mortar shell or bullet hit close to their positions.

The lack of courage of Iraqi soldiers led to laughter among the Kurdish Peshmerga forces stationed nearby in a supporting role. Unlike the Iraqi soldiers, the Peshmergas did not move one inch, kept on smoking, and were surprised when they saw suddenly all the soldiers fled.

“Did you film that?” one Peshmerga soldier asked me, with evident disgust.

“This is not the first time the Iraqi army ran away,” said Peshmerga soldier Ali Ahmed, making the case that the Kurds should get more backing: “Unfortunately the world does not appreciate us. We have not received much in terms of salaries, weapons or support.

“If this huge force you see here were Peshmerga forces, we would have taken the village easily,” he added. “We are not afraid.”

In the beginning it was difficult to take the criticism by the Kurdish Peshmerga seriously due to the ongoing rivalry between the Kurds and the Iraqi military over disputed territories. And it’s worth noting that the Peshmerga had difficulties defending their front lines in August 2014 when ISIS attacked them and quickly overran many positions, including the Yazidi town of Sinjar, leading to the genocide of the Yazidi minority.

Since then, however, Peshmergas have recovered with the help of U.S. airstrikes, Western coalition training, and German advanced anti-tank rockets and weapons. While the Peshmerga only have two brigades equipped with U.S. weapons, the Iraqi Army is fully equipped with weapons, armored vehicles, and artillery. Many of the Kurdish Peshmerga have only their self-armored trucks and their old Kalashnikovs. And, still, they advance more quickly than Iraqi government forces.

Commander Zeyran Sheikh Hossani, the deputy commander of the Peshmerga troops here, who closely coordinates with the Iraqi commanders on the front, was shocked.

“The Iraqi army is not moving as strongly as it should be,” he told The Daily Beast. “Taking back Sinjar for us Peshmerga was very difficult near the Syrian borders, but we are not like the Iraqi army, and we took it in two days.”

“We fight for our own blood, but the Iraqi army cannot take one village in one day,” he added.

“If they don’t change their military tactics, they will not reach Qayarra, they will not even reach the river,” he said. “The main problem is they don’t fight for their beliefs, if we had the same equipment and weapons, we would have already cleared the area in a few days.”

“As you can see they have much better weapons and vehicles than us, at the current pace, I wonder how long it will take for them to take Mosul, if they cannot take even one village in two days,” he said.

Later in the afternoon two ISIS mortars hit close to the Iraqi army positions that had been deserted earlier.

The lack of morale among Iraqi soldiers indicates that maybe more U.S. boots on the ground are needed, or more support for the Kurdish Peshmerga forces, to make the Mosul operation more feasible. Another option would be involving the Iraqi Special Operation forces that played a major role in clearing out Ramadi.