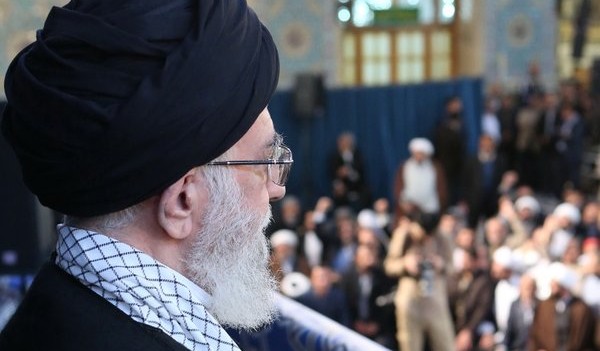 PHOTO: Supreme Leader looks out over an audience in Mashhad on Sunday

UPDATE 1330 GMT: The Rouhani Government has avoided any confrontation with the Supreme Leader over his speech on Sunday, issuing declarations that it will implement the “Resistance Economy”.

President Rouhani said during a visit to the Kish Island Free Trade Zone on Monday that, in line with the principles of the resistance economy, all Iranians should pursue technological know-how and investment to improve production.

On Sunday, Economy Minister Ali Tayyebnia wrote the Supreme Leader pledging efforts to carry out plans for the resistance economy.

ORIGINAL ENTRY: Iran’s Supreme Leader has used his New Year’s address to put out a warning to the Rouhani Government.

Much of Ayatollah Khamenei’s speech in Iran’s second city Mashhad on Sunday was a denunciation of the US. Two months after the implementation of the July 2015 nuclear agreement, he claimed that Washington was not fulfilling the provisions, withholding Iranian assets and failing to lift sanctions.

Khamenei summarized the alleged US efforts to undermine the Islamic Republic: “One of enemy’s means of hostility is propaganda and Iranophobia, another is infiltration and the other is sanctions.”

However, beyond the “deceptions” of the Obama Administration, the Supreme Leader’s message was for his own Government. A day after President Rouhani hailed the nuclear agreement in the Joint Comprehensive Plan of Action and said that the Government would follow with plans for economic recovery, Khamenei issued warnings. Questioning whether there could be further progress, he confronted Rouhani’s foreign policy approach of “engagement”:

There are of course some inside Iran who believe in and accept this moving discourse of the arrogance system and who try to convince others as well.

They believe Middle East or domestic problems can be solved by JCPOA 2 and 3. This means giving up principles and red lines and yielding to the arrogance. Yielding means Iran would ignore committed principles like supporting Palestine and resistance in region and the oppressed in Bahrain and Yemen.

The Supreme Leader even asserted that some officials “flagrantly extend the hand of friendship to the Zionist enemy”.

A Fight-Back Against Centrists

Khamenei issued his warning less than a month after a centrist-reformist bloc, linked to Rouhani and former President Hashemi Rafsanjani, won unexpected victories in elections for Parliament and the Assembly of Experts.

The List of Hope claimed a significant minority of seats — including all 30 MPs and 15 of 16 Assembly members from Tehran — despite the attempt by the Guardian Council to limit the elections by disqualifying thousands of candidates, including more than 95% of reformist applicants.

The development has unsettled hardliners and conservatives, who fear that Rouhani and his allies will try to open political and social space and may even try to alter the Islamic Republic’s system. Those steps could include a proposal to replace the Supreme Leader with a fixed-term Council after Khamenei’s death.

Rouhani fed the concerns last week when he defied the judiciary to criticize the media ban on former President Mohammad Khatami, whom he called “my dear brother” in a speech in Azad. Rafsanjani has criticized the Guardian Council over its vetting of election candidates.

The Supreme Leader drew one line on Sunday when he said elite military structures like the Islamic Revolutionary Guards Corps and the Qods Force must be supported. He added, “Arrogance [the enemy] believes if Iranian nation wants to get rid of US, it must give up content of Islamic Republic & Islamic notions & its security.”

Facing the hardline-conservative anger, the Rouhani Government has the trump card that it is pursuing the economic program needed for Iranian recovery after years of mismanagement, corruption, and sanctions.

However, Khamenei declared yesterday that he could take charge of the plans through his “Resistance Economy”, first promoted in 2012 as a path to self-sufficiency against Western Pressure.

In facing enemy sanctions we should either tolerate difficulties of sanctions or resist through #ResistanceEconomy.