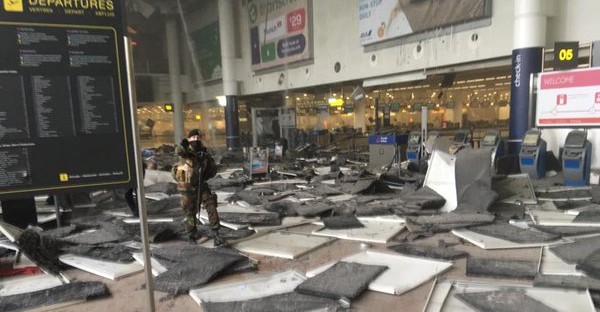 The prosecutor confirmed Ibrahim el-Bakraoui was responsible for the first explosion at Zaventem airport, and said the second suspect, responsible for a subsequent suicide bombing, has not been identified.

A third bomb did not detonate, apparently because the components were not properly mixed.

Van Leeuw said Khalid el-Bakraoui was responsible for the bombing at the Maalbeek metro station.

One person was bought in for questioning last night and is being investigated by the police. Another person has been freed after a thorough interrogation, the prosecutor said.

He said 32 people were confirmed dead in the attacks and a further 270 injured.

UPDATE MARCH 23, 0700 GMT: Belgian officials have named the suicide bombers in the Zaventem airport attack, which killed at least 14 people and injured 90, as brothers Ibrahim and Khalid El-Bakraoui.

Police said they knew of the brothers before Tuesday’s bombings. A federal prosecutor said they are “actively looking” for a third attacker, Najim Laachraoui:

The el-Bakraroui brothers (left and center) with Laachraoui in the airport: 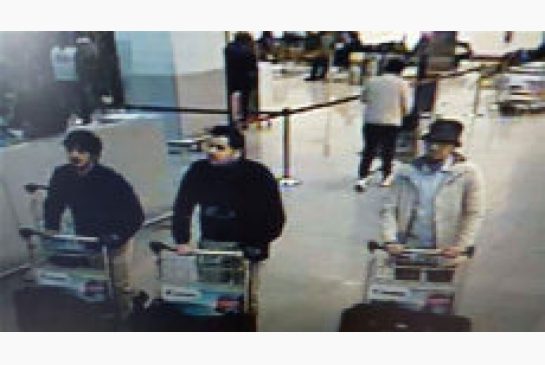 The brothers are said to have had a long involvement in organised crime in Belgium. Recently, they were being sought for connections to last November’s Islamic State attacks in Paris

One of the brothers rented a flat in southwest Brussels which was raided by police on March 15 and where Paris suspect Salah Abdeslam had been present. One member of the Paris cell, an Algerian named Mohamed Belkaïd, was shot by a police sniper in the raid.

One of the brothers is also said to have rented one of the hideouts of the Paris team, in Charleroi in Belgium, before November’s attacks, and is believed to have provided ammunition and weapons for the assaults.

UPDATE 1730 GMT: Belgian authorities have confirmed that this is a photo of a potential suspect, whom they want to question, in the bombings: 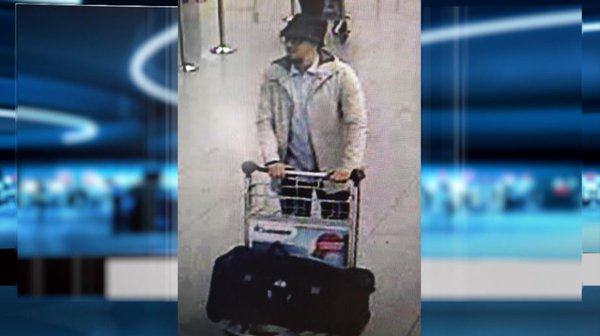 UPDATE 1540 GMT: The Islamic State has claimed responsibility for the attacks.

The ISIS-affiliated Amaq news agency said, “Islamic State fighters carried out a series of bombings with explosive belts and devices on Tuesday, targeting an airport and a central metro station in the centre of the Belgian capital Brussels.”

UPDATE 1220 GMT: Belgian prosecutors say police have identified one of the attackers as a fugitive accomplice in November’s Paris attacks by the Islamic State.

The sources said Najim Laachraoui, 24, was identified from DNA on suicide belts.

Laachraoui reportedly left for Syria in February 2013 and returned to Europe under a false name, travelling to Hungary in September with Salah Abdeslam, the prime suspect in the Paris assaults.

Abdeslam was arrested in a raid in Brussels on Friday.

UPDATE 1220 GMT: The toll has sharply risen to 26 dead and 136 injured with the inclusion of deaths from the Maalbeek metro station bombing.

Authorities confirmed 15 deaths and 55 injured in the blast in a carriage at the platform. At the Zaventem airport, 11 people were killed and 81 wounded.

The bombed carriage at the Maalbeek station: 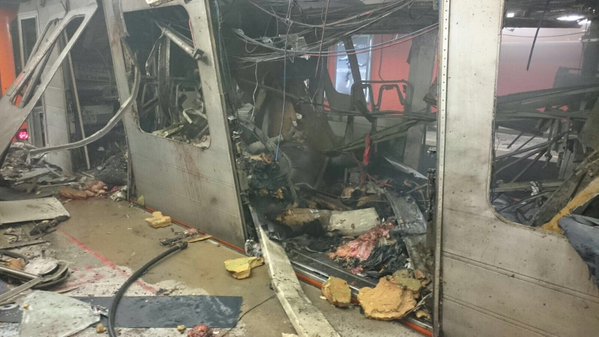 UPDATE 0930 GMT: The casualty figures have been revised to 13 dead and 35 injured.

UPDATE 0820 GMT: There are reports of an explosion at the Maalbeek metro station in Brussels. 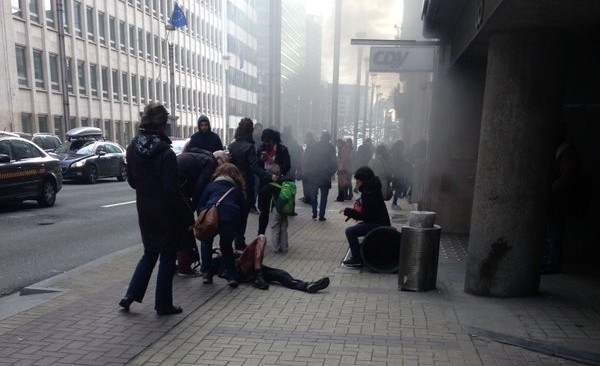 ORIGINAL ENTRY: The international airport in Belgium’s capital Brussels has been struck by two large explosions, with claims of the detonation of bombs in the passenger terminal.

The bombs reportedly were detonated next to the American Airlines check-in desks at Zaventem airport. The Belgian news agency Belga is reporting one death, and more than 10 people are said to have been injured.

However, firefighters are speaking of a higher toll, with 11 killed and 25 injured.

The terminal was evacuated and the airport put on lockdown, with all train service suspended.

An employee of the air cargo service Swissport said:

I was on a break and heard and felt a big explosion – we have from here a view over the departure hall and saw a plume of smoke come out.

The windows are completely shattered. People went outside in shock. It doesn’t look good.

On Friday, Belgian police captured Salah Abdeslam, the main suspect in the Islamic State’s Paris attacks in November, in a Brussels neighborhood.

People fleeing after the explosions:

Sky News’s Alex Rossi as people were evacuated from the terminal: 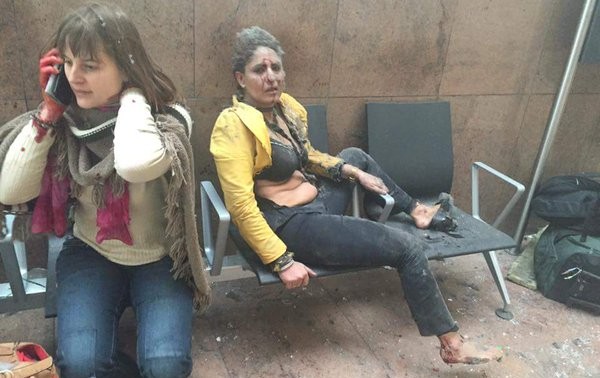 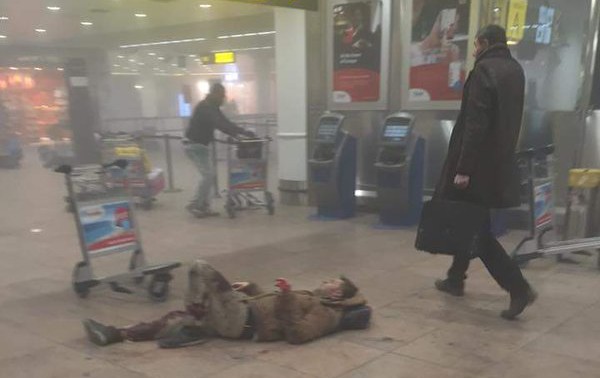 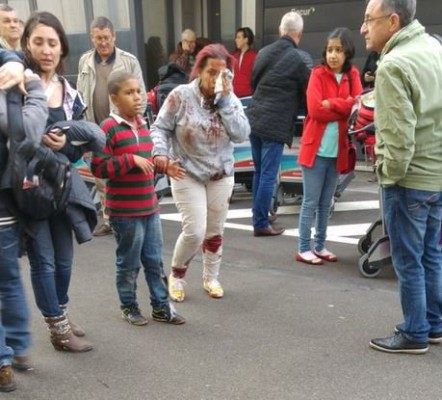 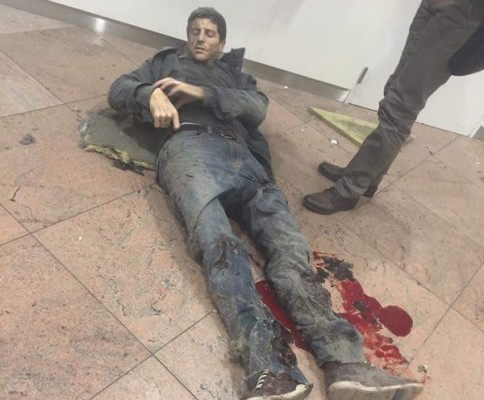