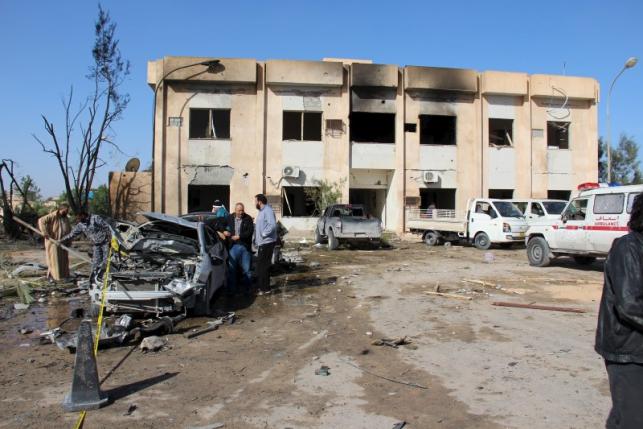 PHOTO: Police training center in Zliten, bombed on Thursday by the Islamic State

The Islamic State has claimed responsibility for Thursday’s suicide truck bombing on a police training centre in Libya that killed at least 60 people and wounded more than 200.

The bomb, the deadliest since the fall of the Qaddafi regime in October 2011, was detonated at the police training center in the coastal town of Zliten as hundreds of recruits gathered for a morning meeting.

“This operation is one in a series of the battle of Abu al-Mughira al-Qahtani, which will not stop until we liberate all Libya,” the Islamic State’s Tripoli group said in a statement. 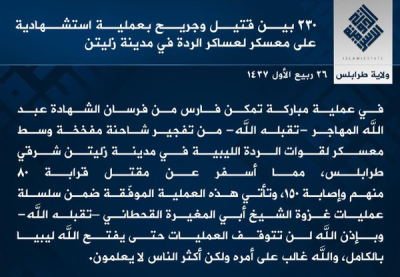 ISIS launched the “al-Qahtani battle” earlier in the week, attacking the Mediterranean oil ports of Sidra and Ras Lanuf in northern Libya. The assaults killed at least nine guards and a civilian and set oil tanks on fire.

The Islamic State has expanded its presence in Libya this year amid fighting between rival militias and rival governments in the north African country. They now control the city of Sirte, to the west of the oil ports.

Libya’s Prime Minister-designate under a UN-backed plan, Fayez Seraj, said on Friday that a new government would be named by a January 17 deadline.

European Union foreign policy chief Federica Mogherini said after a meeting with Seraj that the ISIS attacks “remind us that the security situation in Libya needs to be tackled immediately and with unity”.