Iran Daily, Nov 2: MPs “No Implementation of Nuclear Deal Until Sanctions Are Lifted” 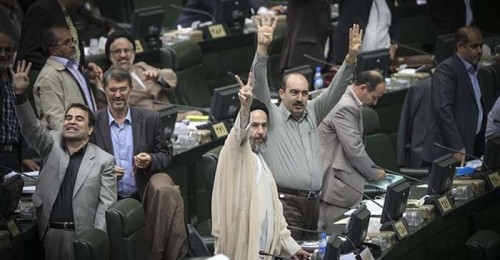 PHOTO: iran’s MPs at the October 20 approval of the nuclear deal

UPDATE 1430 GMT: Iran has begun implementation of the July 14 nuclear deal, shutting down uranium enrichment centrifuges, said the head of Iran’s Atomic Energy Organization on Monday during a visit to Tokyo.

“We have already started to take our measures vis-a-vis the removal of the centrifuge machines — the extra centrifuge machines. We hope in two months time we are able to exhaust our commitment,” Ali Akbar Salehi told Japanese State broadcaster NHK.

Under the terms of the agreement, Iran must reduce its stock of about 19,000 centrifuges to just over 5,000 and must move all of its enriched uranium outside the country.

Salehi said it was important that there be “balance” in implementing the deal, indicated that all sanctions against Iran should be lifted promptly upon implementation.

ORIGINAL ENTRY: In a letter to President Rouhani, Iran’s MPs have urged the Government to withhold implementation of the July 14 nuclear deal until all US and European Union sanctions are lifted.

More than 210 of the 290 legislators in the Majlis said “no practical measure should be taken”, calling on the Government to set up a “powerful, informed and astute” committee to supervise implementation.

Foremost among those conditions was the demand of a “written declaration by the US President and the European Union” that the sanctions “will be fully lifted” and that there can be no “snap-back” re-imposition of the restrictions.

Last Friday, the Supreme Leader’s office reiterated the position through Tehran Prayer leader Ayatollah Movahedi Kermani, “We will recognize the JCPOA only when it observes the nine conditions set by the Supreme Leader.”

However, Khamenei balanced between the critics and the Government on Sunday, praising Foreign Minister Mohammad Javad Zarif and Iran’s nuclear negotiators in a speech to diplomatic personnel.

Under the JCPOA, sanctions will be removed or suspended when the International Atomic Energy Agency verifies Iranian compliance with the deal. Seeking recovery of a crippled Iranian economy and facing a large budget deficit, the Rouhani Government is hoping for the clearance in mid-December.

Even as the Supreme Leader and hardline critics have set out their conditions, Zarif and other officials have discussed measures for implementation. Last Friday, Zarif met US Secretary of State John Kerry and the European Union foreign policy chief Federica Mogherini on the sidelines of a Vienna conference on the Syrian crisis.

Iranian authorities re-arrested prominent journalist Isa Saharkhiz on Monday on charges of “insulting the Supreme Leader” and “propaganda against the regime”.

A post on Saharkhiz’s Facebook page announced the arrest and posted photos of a search warrant for his home.

Saharkhiz, a journalist for more than 30 years and a former Deputy Minister of Culture, was seized in July 2009 amid the protests over the disputed Presidential election. He was released in October 2013.

Saharkhiz’s son Mehdi wrote of the arrest on Twitter and said his father had started a hunger strike.

In another arrest on Tuesday, Ehsan Mazandarani, the managing director of the Farhikhtegan newspaper, was detained for “security reasons”.

Iran: We Resisted Other Powers’ Demand For Assad Departure in 1 Year

Iran’s Deputy Foreign Minister Hossein Amir Abdollahian has said that Tehran resisted the demand of other powers, at last Friday’s Vienna conference, that Syria’s President Assad depart after one year.

Amir Abdollahian said on Sunday that the countries insisted on a “political process” beginning in six months and ending after 18.

He denounced others, including Saudi Arabian Foreign Minister Adel al-Jubeir for allegedly saying that “Syrian people are unable to determine their own political future”:

Amirabdollahian:Some Countries in #SyriaTalks believd that elections not an apt mechanism & future of #Syria needs 2B decided in the session

Both Russia and Iran, allowed into negotiations for the first time, are calling for Presidential and Parliamentary elections while escalating military support for their ally Assad.

Throughout the gathering, Mr. Al-Jubeir tried to set a timetable for President Bashar al-Assad’s departure. He wouldn’t care about the Syrian people’s right to self-determination at all, and made baseless comments.

At one point when the conference was in session and other ministers were in attendance, [Iranian Foreign Minister Mohammad Javad] Zarif responded to those remarks nonchalantly, and, at another, he openly rejected each of his comments.

Despite the recent loss of Iranian commanders and dozens of troops inside Syria, the Minister denied that Iran has put fighters onto the battlefield along the Syrian military:

#Iran DepFM Amirabdollahian: We don't have troops in #Syria, but military advisers who are in Syria because of Syrian government's request.