Israel-Palestine Analysis: Everyone’s Giving Up on the “Peace Process” 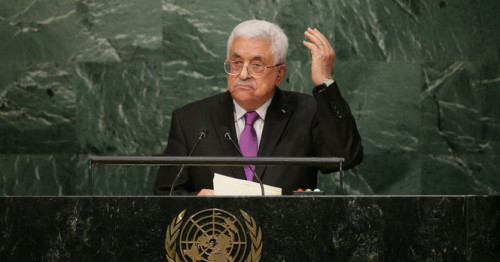 Asaf Siniver of the University of Birmingham writes for The Conversation:

The Israeli-Palestinian “peace process” has been effectively comatose for at least a decade. But if the addresses made at the UN by the Palestinian and Israeli premiers are anything to go by, any prospect of a negotiated settlement in the foreseeable future is now beyond the wildest dreams of even the most ardent optimists.

In his address to the General Assembly, the President of the Palestinian Authority, Mahmoud Abbas, declared that as long as Israel continued to violate them, the Palestinians would no longer be bound by the 1993 Oslo Accords that established the core terms for the peace process as pursued ever since.

He stopped short of saying what the practical implications of his statement will actually be. And despite the dramatic tone, this has effectively been Palestinian policy since 2011, when Abbas first appealed to the UN to unilaterally change the status of Palestine outside the bilateral framework of the Oslo Agreements. Abbas’s policy since then has taken Palestine through a series of symbolic victories and defeats.

Abbas’s address was meant for his audience at home, as well as the international community. Fearful of being outmanoeuvred by Hamas and criticised by his own people for the state of Palestinian economy and for acquiescing to Israeli diktats, this was a desperate appeal of a desperate leader.

But short of resigning from office or disbanding the Palestinian Authority, it is yet unclear how Abbas could single-handedly change the rules of the game.

Bibi Stares Down the Assembly

Addressing the General Assembly the next day, Israeli Prime Minister Benjamin Netanyahu had the chance to rebut Abbas’s message to a global audience – but he underplayed his hand.

The address had all the usual hyperbole and flamboyance which by now have become the hallmark of a Netanyahu appearance before the General Assembly. On previous occasions “Bibi” has variously shown up equipped with the Nazis’ blueprints for the Auschwitz concentration camp and a cartoonish drawing of a bomb to illustrate Iran’s nuclear programme.

This time the gallery was treated to a minute-long silence from the Israeli prime minister halfway through his speech, supposedly to counter the organisation’s own “deafening silence” over Iran’s repeated threats to annihilate Israel. Even cherry tomatoes and the late Yankee catcher Yogi Berra were invoked to make the case for Israel. 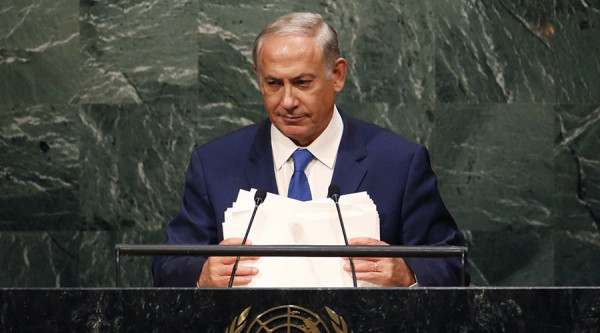 But even coming off Abbas’s remarkable address, the Palestinian issue was not Netanyahu’s main focus. As in previous years, it was Iran’s nuclear ambitions. Railing against the recent agreement with Tehran, Netanyahu delivered a stern warning that Israel will never allow Iran to join the nuclear club.

His second gripe concerned the UN’s “obsessive bashing” of Israel, especially against the remarkable silence of the General Assembly in the face of the atrocities the Assad regime has committed in Syria. He concluded his address by urging the UN to get behind Israel, describing the Jewish state as “civilisation’s frontline in the battle against barbarism”.

In between warnings about the genocidal menace of Iran and the reprimanding of the UN over its hypocritical treatment of Israel, Netanyahu spent little time on the Palestinian issue. Rather than presenting a concrete Israeli alternative to what he termed “Palestinian rejectionism”, Netanyahu merely called on Abbas to return to the negotiation table without preconditions.

If any further evidence was needed that Israeli-Palestinian reconciliation is as unlikely as ever, it was offered at the UN by US President Barack Obama.

As Obama’s term nears its final year, it is looking like he will not make the indelible mark he hoped to leave on the Israel-Palestine conflict, despite the indefatigable efforts of his two Secretaries of State, Hillary Clinton and John Kerry. And if his UN speech was anything to go by, even Obama’s lofty rhetoric on the the issue has gone out the window.

In his 2014 address to the UN General Assembly he mentioned the Israel-Palestine issue ten times, and in 2013 no fewer than 26 times. In 2015 he glossed over it altogether, focusing instead on the Syrian crisis, American relations with Russia and Iran, and climate change.

Why? Obama’s silence on an issue he singled out as among his top priorities in his famous Cairo speech of 2009 cannot have been mere lexical absent-mindedness. Words make and shape policy –– and this Presidential snub signals the end of the road for serious American involvement in the conflict for the remainder of the Obama presidency.

His legacy in this area will fall somewhere on the spectrum between naivety and incompetence. Common wisdom and historical precedent also dictate that when the new president enters office in January 2017, there will be little appetite to invest significant political capital in resolving a conflict which has already defied a generation of American diplomacy.

With the US apparently abdicating its hitherto unchallenged role as the principal mediator, manager and sponsor of the peace process, the leadership vacuum will most likely be filled by the European Union.

The EU is no more capable of resolving the Israeli-Palestinian conflict than the US, but its more vocal opposition to Israeli occupation and the construction of settlements in the West Bank may shift the debate. Rather than investing political capital in inducing a negotiated settlement, the top priority may be to sanction the Israeli government to reconsider its policies.

Any such approach is positively futile. It would harden rather than soften an already intransigent right-wing government committed to expansion into the West Bank and East Jerusalem.

It will also further harden the already intransigent Palestinian leadership, which for several years has declined to enter bilateral negotiations with Israel in good faith. It has instead insisted on unilaterally pressuring Israel via international forums such as the International Criminal Court –– a strategy all but doomed to have limited impact.

The sad irony of this conflict is that only Israel can create a Palestinian state, by ending its 48-year occupation of the West Bank. Likewise, the Palestinians will only get their state by talking to Israel rather than boycotting it.

But if this year’s performances at the General Assembly are any indication, neither of these scenarios is likely to happen under the current vacuous Israeli and Palestinian leaderships.