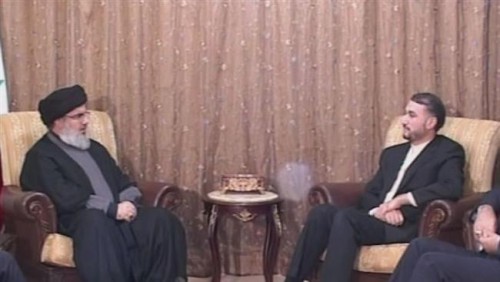 No details were given of the meeting. Instead, Syrian State news agency SANA put out template statements such as Assad’s “Syria welcomes the efforts and contacts made by Iran with the aim of solving the Syrian crisis”.

SANA did implicitly refer to the recent Russian-Iranian initiative for high-level talks, blocked by Saudi Arabia last month: “The ideas put forth in the regional and international arena to activate the political track to solve the crisis in Syria were…on the table.”

The State news agency also features Iran’s renewed commitment to the President’s hold on power, quoting Abdollahian, “Iran appreciates and lauds the central and pivotal role of President al-Assad in preserving Syria’s national unity, combating terrorism, and his guaranteeing of leading Syria out of multiple crises that gripped it during the past few years.”

Syrian State media highlights al-Halqi’s gratitude for Tehran’s support “that eases the impacts of war and unfair economic siege” on the Assad regime. Implicitly pointing to the difficulties for Damascus — and the essential backing from Iran — he hailed the importance of Syrian-Iranian cooperation to ensure the basic needs of Syrians from nutritional, medical materials and oil production, particularly through the Iranian credit line”.

Iran initially gave a $3.6 billion line of credit to the Assad regime in July 2013. After months of discussions beginning last autumn, Tehran — despite its own economic problems — finally extended more aid. No amount has been confirmed, but it is believed that Iran provided $1 billion after rejecting Damascus’s requests for up to $6 billion.

Earlier on Wednesday, Amir Abdollahian saw Hezbollah leader Hassan Nasrallah in Beirut. The Iranian official declared, “All countries in the region should be vigilant in the face of conspiracies by the Zionist regime; and Muslim countries must take care not to be consumed by the flames of war, extremism and terrorism because of imprudence on the part of certain parties.”

Last month Foreign Minister Mohammad Javad Zarif saw Nasrallah, whose backing has been essential for the survival of Syrian President Assad, as Tehran promoted a Russian-Iranian initiative for high-level political talks, However, on the same day, Saudi Arabia undermined the diplomatic moves by insisting that Assad must step down before negotiations began.

Iran has also coordinated military operations with Hezbollah, whose forces have advanced from the Lebanon border towards Damascus, both to prop up the Syrian regime and to prepare a buffer zone if Assad should fall.

Amir-Abdollahian also spoke of the local situation in Lebanon, amid mass protests that started on August 22 over political paralysis, corruption, and failure in public services.

“Iran always supports Lebanon’s and the region’s security and stability, and stresses national unity in Lebanon,” the Minister said.