Iran Daily, Sept 9: Arguments Within Regime Over the Nuclear Deal 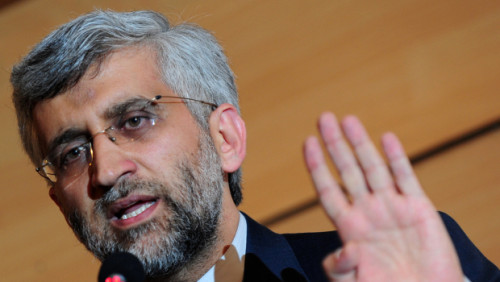 There were arguments within Iran’s regime on Tuesday over the July 14 nuclear deal with the 5+1 Powers, as the Supreme Leader’s office had to knock back the criticism of one of its top representatives.

Saeed Jalili, the Supreme Leader’s representative to the Supreme National Security Council, challenged the deal during a meeting with the Parliamentary Commission reviewing the agreement.

Jalili — Secretary of the SNSC and Iran’s lead nuclear negotiator from 2007 to 2013 — said acceptance of the deal would mean the renunciation of Iran’s “100 God-given rights” and treat it as an inferior country under the Nuclear Non-Proliferation Treaty. This would violate the Supreme Leader’s specified red lines on the agreement, he argued.

Maintaining the Supreme Leader’s cautious line over approval of the deal, his top aide Ali Akbar Velayati responded that Jalili’s statement was “his own interpretation”.

The Supreme Leader has supported the nuclear negotiations; however, in recent weeks, he has balanced between the Government and the deal’s opponents as he has repeatedly denounced the US. Last week, he put out an ambiguous statement over the key issue of whether Parliament must vote on the agreement, saying it has a “role” in the process but leaving it unclear whether this meant a formal decision.

Senior nuclear negotiator Hamid Baeidinejad said on Tuesday, “From the first day, the negotiating countries believed that the JCPOA [Joint Comprehensive Plan of Action] had a different dimension than an international treaty. Therefore, it does not require parliamentary approval.” He continued:

The negotiating team from the first day believed in another option that was moderate and realistic; this was involving the Parliament completely with the JCPOA, which included the Parliament’s effective participation in confirming and implementing the JCPOA and completely understanding the document.

However, Baeidinejad left room for a Government retreat: “The only difference between this option and the previous option has to do with the mode of ‘approving the document’. In this field, we need legal specialists.”

The Government would like the deal to be endorsed by the Supreme National Security Council rather than facing the chance of rejection by anti-agreement MPs.

Mohsen Rezaei, the Secretary of the Expediency Council and a 2013 Presidential candidate, added to the pressure on the Government in a televised interview, “The group that [wants] to prevent the JCPOA review in Parliament is of two types [of individuals]; some are compassionate, but some of them are questionable and are irrational.”

He continued, “Any international agreement that will be enforced in Iran…must go to Parliament, because this prevents secret and unofficial measures in the country.”

The spokesman for the Parliamentary Commission, Hossein Naghavi Hosseini, appeared to give the Government a way out, “It is not the Guardian Council’s opinion that the government must present [the deal in a bill”.

However, the Guardian Council’s spokesman Nejatollah Ebrahimian said in a press conference, “Even if the JCPOA is not an international treaty, the Parliament still has the power to legislate.”

Supreme Leader: “We Will Not Hold Talks With US Except on Nuclear Issue”

The Supreme Leader has again denounced Washington without opposing the July 14 nuclear deal.

Ayatollah Khamenei told an audience on Wednesday, “We did not and will not hold talks with US on issues other than nuclear negotiations.”

US officials seek negotiation with #Iran; negotiation is means of infiltration and imposition of their wills.

Khamenei has always maintained that the regime will not cooperate with the US on regional matters. He overruled Rouhani Government’s attempt to work with the Americans after the Islamic State’s offensive in Iraq in spring 2014, and he has reiterated the position in a series of recent speeches.

Khamenei also issued a challenge to Israel, “The combatant, epic, and jihadist spirit will never leave Zionists alone for a single moment.”

Meanwhile, he warned again that the US would pursue “sedition” — the regime’s term for the mass protests after the disputed 2009 Presidential election — inside Iran:

Some people insist on disguising this Great Satan as the savior angel. [But] the Iranian nation expelled this Satan. We must not allow that, after we expelled it through the door, it could return and gain influence [again] through the window.

He closed with a jab at Hassan Rouhani over the President’s attempt to curb the Guardian Council’s power to vet and disqualify election candidates. Questioning “certain people” who have raise doubts about the wholesomeness of elections, he emphasized that the Guardian Council is the “watching eye” of the Islamic Republic.