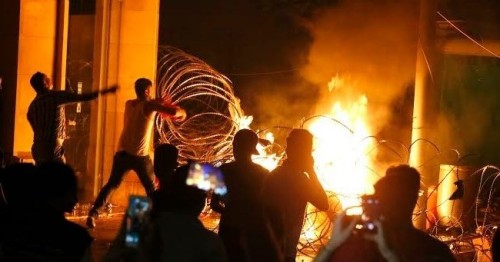 One protester has been killed and more than 400 people wounded amid the “YouStink” anti-corruption protests in Lebanon’s capital Beirut.

The demonstrations, spurred by a garbage crisis after the closure of Beirut’s main landfill a month ago, began on Saturday in the capital’s main squares. Police shot into the air and used tear gas and water cannons as protesters approached their lines near the Parliament and other Government buildings.

The fighting continued Sunday as about 200 youths, some wearing scarves or masks to cover their faces, threw stones and bottles filled with sand at police and tried to pull down security barricades.

At least 40 people were hospitalized, while video showed a man mortally wounded by a shot to the head (Warning — Graphic):

Lebanon’s government has been crippled for more than a year by political in-fighting. A President has not been appointed. Parliament has extended its term twice but has not convened as legislators dispute whether they can work before a President is in place.

Protesters have been angered by power and water shortages as well as the corruption and political paralysis. On Saturday, they chanted, “The people want to topple the regime!”, and carried posters denouncing the politicians, “Some trash should NOT be recycled.”

In a televised address on Sunday morning, Prime Minister Tammam Salam said members of the security forces will be held accountable for the violence against protesters. Salam also called on an emergency session of Palriament on Thursday.

Salam said that if legislators cannot reach an agreement on the garbage crisis on Thursday, the Government may be dissolved.