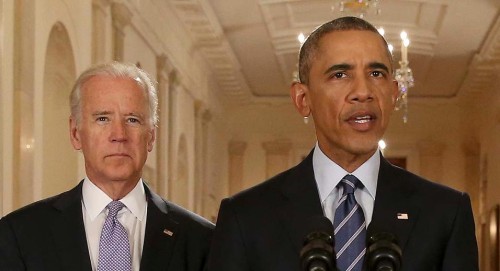 The White House is circulating a number of documents for the press, beginning with a one-page “Iran Toplines” summary, on Tuesday’s nuclear deal with the Islamic Republic.

The Obama Administration is also putting out general talking points; a document explaining that “the Joint Comprehensive Plan of Action (JCPOA) exceeds all five benchmarks for a good deal” put out by a series of former Government officials last month; “key arguments”; key excerpts of the deal’s final text; and an explanation of how the deal fulfils the framework agreement from April: 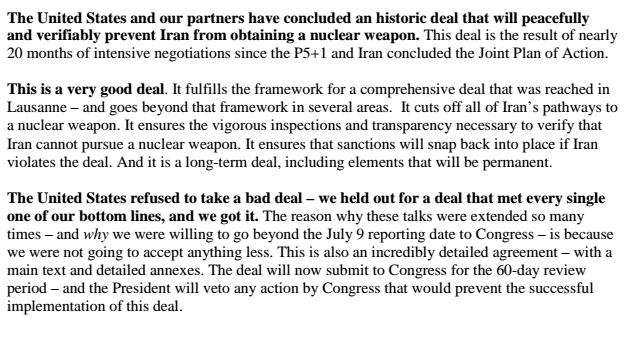 After many months of principled diplomacy, the P5+1 [5+1 Powers — the United States, the United Kingdom, France, China, Russia and Germany — along with the European Union, have achieved a long-term comprehensive deal that will verifiably prevent Iran from acquiring a nuclear weapon and ensure Iran’s nuclear program will be exclusively peaceful.

This Joint Comprehensive Plan of Action (JCPOA) is a very good deal. It effectively cuts off all of Iran’s pathways to a nuclear weapon and ensures the inspections and transparency necessary to verify that Iran is complying. Sanctions will snap back into place if Iran violates the deal. The President made clear that he would not accept any backtracking from Iran and would not agree to anything that did not live up to the framework that was announced in April. The agreement we’ve reached does that and then some.

Built on Verification Over the Long-Term

This deal is not built on trust – it’s built on verification. The agreement includes the most comprehensive and intrusive verification regime that we have ever negotiated. It ensures both timely and effective International Atomic Energy Agency (IAEA) access to any site in Iran necessary in order to verify Iran’s compliance, including military sites such as Parchin. This is a long-term deal that will give us a permanent capability to ensure that Iran’s program is peaceful.

For 10 years, Iran will be subject to the strictest limitations on its facilities, domestic enrichment capacity, and research and development. Other provisions extend for 15 and 25 years with some elements lasting forever. Iran has committed to address all of the outstanding issues with regards to the Possible Military Dimensions of its nuclear program in a comprehensive and timely manner.

Iran will only receive UN, EU, and U.S. sanctions relief beyond existing levels after the IAEA verifies that Iran has implemented the key nuclear-related measures agreed upon in the agreement. Sanctions levied for non-nuclear reasons will remain in effect and will continue to be vigorously enforced. The agreement includes a dispute resolution mechanism that clearly lays out the procedure for quickly snapping back all UN, EU, and U.S. sanctions in the event Iran reneges. Neither Iran, Russia, or China — or all 3 together — can block the snapback of sanctions.