Iran Analysis: The Sources of Opposition to A Good Nuclear Deal 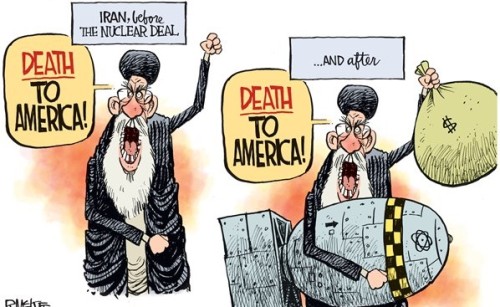 Amid criticism of the nuclear deal with Iran — such as former Bush official John Bolton’s call for airstrikes on Tehran as an alternative and Republican Presidential candidate Mike Huckabee’s declaration that the agreement will “take the Israelis and march them to the door of the oven” — Paul R. Pillar, a former CIA analyst, writes for The National Interest:

An air of unreality pervades much of the debate on the agreement to restrict Iran’s nuclear program. Opponents of the agreement raise issue after issue on which the agreement is clearly superior to the alternative that would exist if the opponents succeed in getting the US Congress to kill the deal, but the opponents keep raising such issues anyway. There is, for example, long discussion of the details of inspection arrangements and exactly how many days will elapse between when an accusation is made and when international inspectors could enter a facility.

But to the extent any of this is intended as criticism of the agreement, it is beside the point. If the agreement is disapproved, there would not be any such extraordinary inspections, with 24 days or 240 days or anything else in the way of an adjudication period. Indeed, if the agreement is killed, the universe of possible Iranian “violations” of its obligations would be greatly shrunk because Iran would be under no restrictions at all regarding its nuclear program other than the basic commitment under the Nuclear Nonproliferation Treaty not to build weapons. Similarly, complaints about the number of years that certain limits on the Iranian program will be in effect are beside the point — because if the agreement is killed, there will be zero years of limits.

Everything that has been gained under this agreement in the way of restrictions on, and monitoring of, the Iranian nuclear program is a net gain over the situation that prevailed before the negotiations began and over the situation that would prevail if the agreement is killed. To get these gains, neither the United States nor its negotiating partners nor Iran’s regional rivals have had to give up anything that involves any significant risks to themselves. As former International Atomic Energy Agency chief Hans Blix has put it, in return for all the far-reaching commitments Iran has made, the only commitment our side has had to make is to “drop punishment”.

If the current debate were being conducted solely on the merits of the agreement, the outcome would be almost a no-brainer; the agreement is obviously much better than the alternative of killing the agreement, even on a litany of issues that the opponents themselves have been raising. And yet the agreement’s political fate on Capitol Hill does not reflect that. There is substantial probability that Congress will pass a resolution of disapproval — an action that, if allowed to stand, would kill the agreement. There is a lesser, but still significant, chance that Congress would override a presidential veto of such a resolution. The final outcome is likely to come down to the votes of only a few Senators or Representatives.

None of this political prognosis is understandable if one focuses on the substance of the agreement itself. The prognosis is comprehensible only if one realizes that the opposition is being driven by other reasons some people have for wanting to kill this agreement and to preclude any agreement with Iran.

The forces at play will be easily understood and written about by future generations of political scientists. But the American public and politicians are being buffeted (or swept along) by those forces right now. It behooves us to recognize explicitly the principal ones responsible for opposition to this agreement, which are the following.

Even the most fervent Israel-lobby-denier cannot deny that the Netanyahu Government is leading the charge against the agreement at least as much as anyone else is leading it. In Israel, as in the United States, there is a disconnect between sober consideration of the substance of the agreement and other political incentives that are making that kind of sober consideration difficult.

Significant and understandable concern exists across the Israeli political spectrum about any possibility of an Iranian nuclear weapon. It makes sense, from the standpoint of security of the State of Israel, to support an agreement that restricts and scrutinizes Iran’s nuclear program and not to favor killing such an agreement and thereby removing such restrictions. That is why many leading Israeli security professionals — who have dedicated careers to the safety and well-being of their nation — have, even while holding their noses over any dealings with the Islamic Republic of Iran, concluded that the agreement is in Israel’s best interests.

If Prime Minister Netanyahu were focusing chiefly and carefully on ensuring there will be no Iranian nuclear weapon, he would have announced the same conclusion. Clearly he has other motivations.

Netanyahu has come to center much of his political career on fear-mongering about Iran. This tactic works in his favor against domestic political opponents, with his posturing as a tough guy who stands up to foreign threats. But endless enmity with an Iran that is endlessly treated as a rogue state serves other purposes for his government. Keeping Iran in an international penalty box lessens the competition for influence from a regime that will continue (certainly as long as the Palestinian issue remains unresolved) its extremely harsh criticism of Israeli policy. The Iranians may be no more irate about those policies than are the governments of the Gulf Arab states, but Iran is not as restrained in its rhetoric as the latter governments are because of their relationship with the United States.

Emphasizing an overriding threat from Iran, as Netanyahu does in any statement or speech about foreign affairs, also serves as a major rationale for continuation of the extraordinary U.S-Israeli relationship and for framing Middle Eastern affairs in the moderates vs. bad-guys-led-by-Iran framework that Netanyahu’s government prefers. Undermining any incipient rapprochement between the United States and Iran helps to sustain the notion that Israel is the only reliable partner for the United States in accomplishing anything important in the Middle East.

Last but not least, repeatedly invoking Iran as the “real threat” in the Middle East serves to divert attention and change the subject whenever people start to talk about things, such as the occupation of Palestinian territory, that Netanyahu’s government would rather not talk about.

Netanyahu surely does not want to see an Iranian nuclear weapon, but his own behavior and positions indicate that neither does he want to see the issue of Iran’s nuclear program resolved. It serves his purposes to let the issue fester indefinitely, and to have tension with Iran continue indefinitely. To the extent that the new agreement does resolve the nuclear issue — and even worse from Netanyahu’s point of view, to the extent it leads to the United States and Iran doing worthwhile business on other topics — all of the aforementioned advantages to him of endless enmity with, and endless rogue status for, Iran are undermined. And so he is doing everything he can to kill the agreement even though the agreement is in Israel’s broader and longer-term interests.

Thus there are the rhetorical excesses such as endless fulminations about repeating Munich. There are Netanyahu’s repeated warnings, which he has been making for many years even though they keep getting disproved, that Iran is just a few months away from having a nuclear weapon. There is plenty of other inconsistency and goalpost-shifting, as in presenting his cartoon bomb to the United Nations and then not saying anything more about it after an agreement was negotiated that drained his bomb, or in first denouncing the Joint Plan of Action of November 2013 and then backing off when he was denouncing a later and more comprehensive agreement. Consistency doesn’t matter to him; what matters is throwing sand into the gears ofUS diplomacy.

As always in American politics, when the Israeli government takes this unequivocal a position on something, its lobby springs into action. And so AIPAC [the American Israel Public Affairs Committee] is making a huge, cancel-staff-vacations effort to destroy the agreement. Although even AIPAC sometimes has had its own frustrations with the Netanyahu government when the latter has put a highly partisan slant on its interference in U.S. politics, the lobbying organization has its own institutional reasons to continue to beat the drum of Iran as an everlasting threat.

An anonymous former AIPAC official comments, “Iran has been the group’s raison d’être for two decades and it doesn’t know what else to do; its troops are trained to attack Iran and the lobby can’t afford to admit failure lest it lose supporters.” The former official continues, “Iran has been an enormously lucrative fundraiser for AIPAC; just look at what they’re spending on this campaign alone. It needs to keep the issue alive for institutional imperatives.”

Partisanship in the US

As conspicuous as the Israeli government’s role in the campaign to kill the Iran agreement is the partisan divide in the United States. That divide is immediately apparent in the most recent hearings on the subject, as it has been all along with other Congressional action or attempted action to sabotage the negotiations, such as proposals for new sanctions that would have violated the Joint Plan of Action and torpedoed the whole process.

There is nothing in declared Republican Party principles — such as support for free markets, low taxes, and a strong national defense 000 that explains opposition to the agreement. Nor does any determination to oppose resolutely any possibility of an Iranian nuclear weapon explain the opposition when killing the agreement would mean lifting restrictions under which the Iranian nuclear program currently operates. A more plausible explanation for Republican opposition against the agreement is that it is a major initiative of Barack Obama.

The role of anti-Obamaism in Republican positions has been illustrated by the party’s obsessive opposition to the Affordable Care Act, with the dozens of time-wasting repeal votes in Congress and refusal to countenance any acceptance of the act or constructive bipartisan tinkering with it, even though it uses a commercially-based formula that was Romneycare in Massachusetts before it became Obamacare. The ACA is widely regarded as President Obama’s biggest single accomplishment in domestic affairs, and the nuclear agreement with Iran is widely regarded as what will be — if it is not killed — his single biggest achievement in foreign affairs. Thus the agreement excites the same partisan impulses and the same urge to kill, no matter what the consequences that killing would have on the subject it addresses. The reflexive, unthinking nature of what flows from those impulses was illustrated by how quickly a large majority of Republican senators (probably to the later regret of many of them) signed on to the atrocious open letter to the Iranians initiated by Tom Cotton, a freshman with less than two months on the job.