Iran Daily, May 21: Supreme Leader Talks Tough, But Regime Eases Up on Yemen 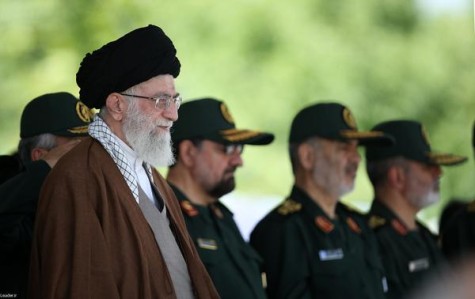 Wednesday in Iran was marked by a disparity between the Supreme Leader’s rhetoric and the substance of regime actions, especially over the Yemen crisis.

Addressing cadets at a graduation ceremony, the Supreme Leader struck a tough pose over the nuclear pose and Iran’s challenge to the US and its allies in the Middle East.

Ayatollah Khamenei ruled out unlimited inspections of Iranian military sites under a comprehensive nuclear agreement and issued a further challenge to the International Atomic Energy Agency:

They demand to be permitted to interview our nuclear scientists; this means interrogation. I will not allow any foreigners to speak with the nation’s respected scientists.

Khamenei told Iran’s negotiators, seeking a comprehensive agreement with the 5+1 Powers (US, Britain, France, Germany, Russia, and China) by June 30, that they must be resolute: “Officials should know that only way to counter the brazen enemy is will power &avoiding inaction. They should show Iran’s grandeur in talks.”

The issue of “possible military dimensions” has not been high on the agenda of the nuclear talks, now drafting a final text of the agreement, but IAEA head Yukiya Amano elevated the issue last week when he insisted that the Agency must have access at any time to military sites.

The Supreme Leader went beyond the nuclear issue to repeat Iran’s challenge to the US and its allies over regional crises:

I have information about the enemies’ plan to spread proxy wars to the Iranian borders in collusion with some silly officials of Persian Gulf countries, not all of them, only some….

They must be aware…that, in case of any misconduct, Iran’s response will be extremely harsh.

However, even as he spoke, Khamenei’s officials were giving some ground on the defiance.

After a week of declarations of a showdown with the US and Saudi Arabia, the Iranian Foreign Ministry said on Wednesday that a cargo ship with aid for Yemen will not land in the country. Instead, it will dock at Djibouti in east Africa for inspection.

Tehran had declared that the cargo ship — which it said was loaded with food, medical supplies, and tents — would defy a Saudi and US blockade, imposed amid Yemen’s civil war between the Iranian-supported Ansar Allah (Houthi) movement and its opponents. The ship was to be accompanied by a destroyer and logistics ship of Iran’s 34th Flotilla.

Deputy Foreign Minister Hossein Amir-Abdollahian said on Wednesday that the ship will now be inspected by personnel coordinating UN aid for Yemenis. He issued the statement after a meeting between Foreign Minister Mohammad Javad Zarif and Valerie Amos, the head of UN humanitarian operations.

Meanwhile, the nuclear talks also appear to have been unaffected by the Supreme Leader’s latest statement. Delegations of Iran and the 5+1 Powers resumed the discussions in Vienna on Wednesday.

Journalist Ahmad Zeidabadi has been exiled as soon as his six-year prison sentence ended on Monday.

Zeidabadi, arrested and sentenced after the disputed 2009 Presidential election, has been sent to Gonabad in northwestern Iran.

The journalist, held for 35 days in solitary confinement in a “coffin-like cell”, was not allowed a visit by his wife until August 2014. He said a month later that he was being severely beaten by interrogators who told him:

We’re ordered to crush you, and if you don’t cooperate we can do anything we want to you. And if you don’t fill out the interrogation papers, we’ll force you to eat them.

Zeidabadi began working as a journalist in 1989 for the national newspaper Ettela’at, and he later worked for Hamshahri before he was arrested in 2000 and detained for seven months. He was also imprisoned in 2003-2004.

In an open letter to Ayatollah Khamenei in April 2007, Zeidabadi asked for the legal and logical explanation for stopping the questioning or criticism of the Supreme Leader. He was told during his most recent detention by interrogators that he had to apologize to Khamenei because he had failed to address him as the “exalted leader”.

Backing up the Supreme Leader’s tough talk on Wednesday, his military advisor has spoken of a “new Cold War” in the Middle East.

We are in a period of strategic instability, uncertainty, and insecurity on a global scale….A new era of the Cold War…on an international scale has been observed.

As long as the Zionist regime is in the region and there is oil in the Persian Gulf, billions of dollars…of arms sales [will be] available, and war and instability will continue.

Rahim Safavi added, “The Zionists and the US are aware of the power of Iran and Hezbollah, and they know that over 80,000 missiles are ready to rain down on Tel Aviv and Haifa. Iran is a powerful country which will give a crushing response to them.”