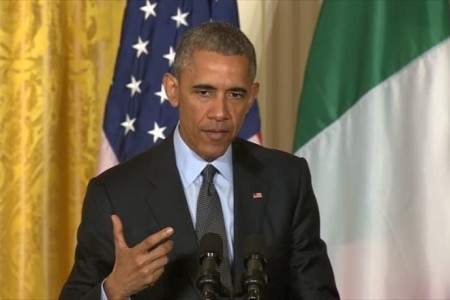 President Obama has signaled a compromise for a nuclear deal, suggesting that Iran can get significant relief from sanctions as soon as a comprehensive agreement is signed.

Obama said the immediate suspension would depend on a “snap-back” provision for the re-imposition of sanctions if Iran violated the terms of the deal.

“Our main concern here is making sure that if Iran doesn’t abide by its agreement that we don’t have to jump through a whole bunch of hoops in order to reinstate sanctions,” the President said at a news conference. “It will require some creative negotiations — I’m confident it will be successful.”

After Iran and the 5+1 Powers (US, Britain, China, Russia, France, and Germany) agreed a nuclear framework on April 2, the US put out the interpretation that UN and European Union sanctions would be lifted and American restrictions suspended upon the International Atomic Energy Agency’s verification of Iranian compliance with the comprehensive agreement — a process which could take months.

Iranian officials, including the Supreme Leader, responded that sanctions relief had to be complete and immediate upon the signature of the deal, although Foreign Minister Mohammad Javad Zarif and President Rouhani continued to give room for manoeuvre with references to the verification of “implementation”.

Zarif told Euronews, in an interview broadcast on Friday night, that there were different interpretations of the framework. He moved away from his previous references to a removal of sanctions linked to “implementation”:

A White House official later appeared to step back from the President’s suggestion of compromise, saying “will not accept a deal without phased sanctions [relief]”.

However, Obama, speaking after a meeting with Italian Prime Minister Matteo Renzi, said the level and timing of sanctions relief are less important to the US than the “snap-back” measures.

The President said US negotiators will be seeking “formulas that get to our main concerns while allowing the other side to make a presentation to their body politic that is more acceptable”.

Iran and the 5+1 resume talks at the level of political deputies on Wednesday, with the European Union’s Helga Schmid meeting Iranian Deputy Foreign Minister Abbas Araqchi. The two sides are seeking a comprehensive agreement by June 30.

Iran has pressed its political offensive on the Yemeni crisis, formally presenting a four-point plan to the UN for a resolution while declaring that Saudi Arabia’s intervention will be defeated.

Foreign Minister Mohammad Javad Zarif submitted a letter to UN Secretary-General Ban Ki-Moon setting out the plan for an immediate ceasefire and end of all foreign military attacks, humanitarian assistance, a resumption of broad national dialogue, and “establishment of an inclusive national unity government”.

Hosting Australian Foreign Minister Julie Bishop, President Rouhani said the crisis could only be settled through a political solution, not through the bombardment of civilians, and assured that Iran is ready to cooperate with other countries to end the violence.

Yemen is not a theatre for confrontation between Iran and Saudi Arabia. Yemen has a problem that has to be resolved by the people of Yemen, by the various political groups in Yemen, and everyone who has influence in Yemen should help.

However, Iran’s Friday Prayer leaders were in no mood for diplomacy. They predicted the “definite defeat of the Saudi regime if Saudi Arabia’s illogical and brutal invasion against Yemen continues”.

In Mashhad, Hojatoleslam Mohammad Baqer Farzaneh assured, “The Saudis will not exit alive from the Yemen quagmire, into which they have unwisely stepped.”

The head of Iran’s ground forces, Brigadier General Ahmad Reza Pourdastan echoed, “Military attack against any country is condemned, and certainly Saudi Arabia’s military attack and aggression against Yemen will end in its defeat and failure.”

Iranian media has used the visit of Australian Foreign Minister Julie Bishop to defend the compulsory wearing of hijab by women.

State outlet IRNA declares, “The Australian Foreign Minister says hijab is not something imposed on women and she herself uses hat, headscarf, or other coverings in her daily life.” 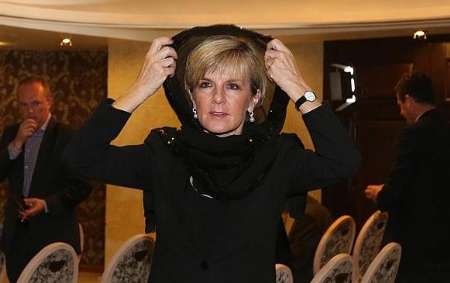 However, even in IRNA’s report, there is a hint of controversy with Bishop showing more hair than authorities might consider appropriate by an Iranian woman: “Asked by a reporter why in a press conference in Tehran she had pushed her headscarf backward or forward, Bishop replied she felt freer that way.”

Iranian journalist and activist Masih Alijenad, living in exile in Britain, had asked Bishop not to wear hijab:

“There are a lot of women in Iran who are going to be following her when she talks about this. This is an opportunity for us. We have been waiting for it.

This is the time for her to ask the Iranian government about the compulsory hijab and human dignity.

Last year Alinejad launched the Facebook page My Stealthy Freedom for Iranian women to post celebratory photos of themselves not wearing any head covering.

Head of Iranian Military: “US Planes Landing at Islamic State’s Airports With Weapons and Supplies”

The commander of Iran’s Armed Forces, General Hassan Firouzabadi, has repeated the conspiracy theory that the US is supporting the Islamic State in Iraq and Syria.

Despite a complete lack of evidence — and despite US bombing of the Islamic State in both countries — Firouzabadi claimed on Saturday, “We have received reports that the US planes visit the Islamic State airports”.

Speaking to reporters at Tehran ceremonies for Army Day, the commander said:

The US shouldn’t supply weapons and money to the Islamic State and then apologizes and says that it has done a mistake. The Americans say that they want to confront the Islamic State but we haven’t seen any practical measure except for reconnaissance and surveillance operations.

Firouzabadi did not name the airports at which US aircraft were landing, nor did he address the US bombing of the Islamic State since last August in Iraq and last September in Syria.

Senior Iranian officials have repeatedly put out the claim that the Americans created the Islamic State to weaken Islam and unsettle countries in the Middle East. Earlier this week Deputy Foreign Minister Abbas Araqchi claimed that Israel and the US were helping bring fighters from the Islamic State, the Nigerian movement Boko Haram, and the Somalian group al-Shebaab into Yemen.