Iran Daily, April 30: Foreign Minister Zarif to New York Audience — “US Will Isolate Itself in World If It Breaks Nuclear Agreement” 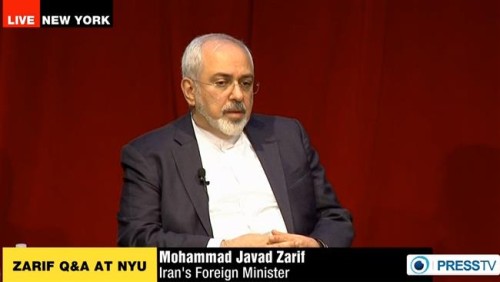 Amid Iran’s renewed nuclear talks with the 5+1 Powers, Foreign Minister Mohammad Javad Zarif has put Tehran’s case to a New York audience, warning that the US risks global isolation if it abandons a comprehensive agreement.

Speaking at a question-and-answer session at New York University, Zarif said, “I don’t think the problems are insurmountable” for resolution by a June 30 deadline. He then cautioned:

I believe the United States will risk isolating itself in the world if there is an agreement and it decides to break it.

So if the U.S. Senate wants to send a message to the rest of the world that all of these agreements are invalid, then you will have chaos in your bilateral relations with the rest of the world,” Mr. Zarif said. “I don’t think that is something that even the most radical elements in Congress want to see.

Speaking about specific elements of the deal, the Foreign Minister maneuvered around the issue of the removal of US-led sanctions by indicating that they could be lifted or suspended with a “few weeks” of signature of a comprehensive agreement.

Following the April 2 announcement of a nuclear framework, the US and Iran publicly differed over the terms of sanctions removal. Washington said that lifting or suspension of US, European Union, and UN restrictions is linked to International Atomic Energy Agency verification of Iranian compliance, while top Iranian officials said the removal must be immediate.

Zarif said on Wednesday that signature of the deal will “terminate all previous [UN] resolutions including the sanctions resolutions”, with binding effect on the US Government. Implicitly recognizing the condition of IAEA verification, he said, “All steps will only take few weeks to implement.”

The Foreign Minister responded to the US condition of re-imposition of sanctions upon any violation of the agreement by reframing the provision as one that could be applied to Washington: “Iran will have its own provision of snap-back if the US fails to meet its obligations.”

Zarif said that Iran is ready to provide the “highest level of transparency” to its nuclear facilities, based on the Additional Protocol of the Non-Proliferation Treaty.

Tehran voluntarily adhered to the terms of the Additional Protocol several years ago during negotiations with Britain, France, and Germany, but withdrew when talks broke down.

However, the Foreign Minister appeared to reiterate Iran’s position against unrestricted access to its military sites, opposing “arbitrary visits which not only Iran but no other country could accept when it comes to its sensitive facilities”.

Republican Senator Tom Cotton, who organized a letter with 46 colleagues warning Tehran that President Obama cannot establish an agreement without Congressional approval, hit back at Zarif on Twitter:

Hey @JZarif, I hear you called me out today. If you’re so confident, let’s debate the Constitution. 1/4

He accused Zarif of hiding in the US during the 1980s Iran-Iraq war “while peasants and kids were marched to die”, saying this showed “cowardly character still on display today”.

The Foreign Minister did not reply.

Representatives of Iran and the 5+1 Powers (US, Britain, France, Germany, China, and Russia) have been meeting since Monday on the sidelines of a UN conference on the Non-Proliferation Treaty.

Student Activist Tavakoli Term is Commuted After 5+ Years in Prison

The six-year prison sentence of leading student activist Majid Tavakoli has been commuted, months before it was to expire.

Tavakoli was arrested in December 2009 just after he gave a speech in Tehran on National Students Day. He was initially sentenced to eight years in prison for “participating in an illegal gathering”, “propaganda against the system”, and “insulting officials”.

Earlier this month the activist was given a three-day furlough, his first during his prison term.

On the eve of International Workers’ Day on May 1, Iranian authorities have arrested at least five labor leaders, amid escalating protests over pay and conditions.

On April 20, four days after thousands of teachers protested against low wages, Alireza Hashemi, head of the Iran Teachers Organization, was detained and transferred to Evin Prison to serve a five-year sentence that had been handed down in 2013.

Protests have risen as about 70% of workers’ wages are now under the official poverty line. About 90% of all contracts are temporary, with no insurance. Some factory workers have not been paid for more than six months.

At least 230 people were arrested in peaceful labor protests between March 2014 to March 2015. Activists such as Rasoul Bogadhi and Reza Shahabi are already serving sentences of at least five years.

Rezaian was arrested in a raid on July 22. He was charged earlier this month with espionage, “collaborating with hostile governments”, and “propaganda against the establishment”. He has been allowed only one brief meeting with a court-appointed attorney.

In a question-and-answer session in New York, Zarif blamed the journalist’s arrest on manipulation by a “low-level operative” of the US Government:

Unfortunately your friend and my friend, Jason, is accused of a very serious crime. And I hope he is cleared. But he will have to face court. He is an Iranian citizen. It is unfortunate that some low-level operative tried to take advantage of him.