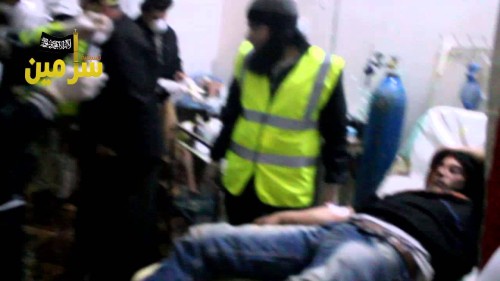 The Assad regime has allegedly dropped chlorine canisters on a town in northwest Syria, causing scores of casualties.

Syrian civil defense workers posted the news from Sarmin in Idlib Province on Monday evening, with video of victims suffering from breathing difficulties. Other footage showed treatment of injured children.

Unconfirmed reports said 20 people, including a family of five, had been killed and more than 100 wounded by four barrel bombs.

Hadi al-Bahra, a senior official in the opposition Syrian National Coalition, accused the regime of responsibility:

Since its deadly chemical weapons attacks near Damascus in August 2013, the Syrian military has used chlorine on a number of occasions, dropping the canisters in barrel bombs from helicopters. The Organization for the Prohibition of Chemical Weapons concluded with a “high degree of confidence” that helicopters had used chlorine in four operations in Hama and Idlib Provinces in spring 2014, killing at least 14 people and wounding hundreds.

After the August 2013 attacks, the Assad regime agreed to hand over its stocks of chemical agents. However, because of its domestic uses, chlorine is not banned under the Chemical Weapons Convention.

On March 6, the UN Security Council adopted Resolution 2209, “condemn[ing in the strongest terms any use of chlorine as a weapon in Syria, signalling it would take “Chapter VII” action if such arms were used again in the nearly four-year-old conflict”.

Regime outlets are claiming that Syrian forces shot down a foreign reconnaissance drone on Tuesday night over Latakia Province in western Syria: 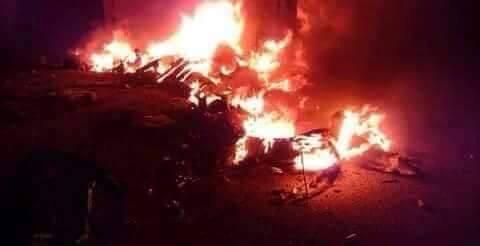 Beyond the chlorine attack on Sarmin, regime warplanes struck elsewhere in Idlib Province in northwest Syria on Monday — aftermath of a raid on Maarat al-Misreen:

Physicians for Human Rights has issued a report on the damage to Syria’s health care system:

As we approach the fifth year of the conflict, at least 610 medical personnel have been killed, and there have been 233 deliberate or indiscriminate attacks on 183 medical facilities….

The Syrian government is responsible for 88% of the recorded hospital attacks and 97% of medical personnel killings, with 139 deaths directly attributed to torture or execution.

The organization documents the attacks on an interactive map.

Between March 15, 2014 and February 28, 2015, 162 medical personnel were killed in 82 attacks on facilities. Seventy of the attacks were carried out by regime forces, with rockets and missiles used in half the assaults and barrel bombs in 40%.