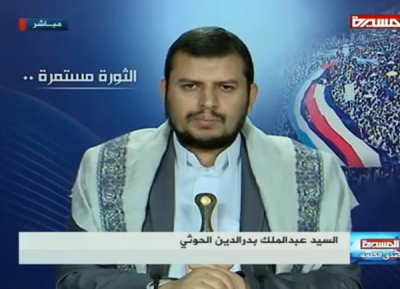 The leader of Yemen’s Houthi movement has called on his fighters to mobilize for an advance in southern Yemen, as the Shia Muslim group took control of the city of Taiz and its airport.

In a live televised speech, Abdel-Malek al-Houthi (pictured) said the mobilization was aimed at the Islamic State, which has been blamed for last Friday’s bombings in two Shia mosques in the capital Sana’a that killed at least 137 people.

Al-Houthi denounced the alternative Government of President Abdrabuh Mansour Hadi, based in Aden in southern Yemen, and said the UN Security Council is led by countries that plotted “evil” against others.

The UN has been trying to broker a political resolution since the Houthis pushed Hadi out of power in Sana’a last month and forced him to flee to the south.

Emotions are running extremely high and, unless solutions can be found, the country will fall into further violent confrontations. Events in Yemen are leading the country away from political settlement and to the edge of civil war.”

Houthi said his foes had encouraged militant violence and used the political reform talks to buy time, hoping to transfer “the Libyan example to Yemen”. He continued, “Al Qa’eda and Daesh [Islamic State] do not have any compassion towards any party, and what’s happening in Iraq and Syria today is a lesson to our country.”

Over the weekend, Houthi fighters seized parts of Taiz, Yemen’s third-largest city, and the airport after clashes with forces loyal to Hadi. Al Jazeera correspondents said dozens of tanks and armoured personnel carriers carrying Houthi fighters had crossed into al-Dhalie and Aden Governorates.