Iraq Feature: US to Shia Militias — We’ll Bomb Islamic State in Tikrit…If You Push Iran to the Side 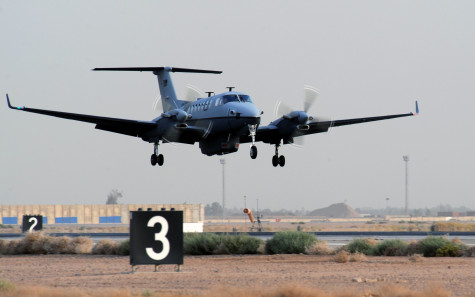 UPDATE 2045 GMT: US warplanes carried out their first airstrikes on Islamic State positions in Tikrit late Wednesday, according to witnesses.

“These strikes are intended to destroy ISIL [Islamic State] strongholds with precision, thereby saving innocent Iraqi lives while minimizing collateral damage to infrastructure,” said Lieutenant General James L. Terry, the commander of the Joint Task Force for Iraq operations. “This will further enable Iraqi forces under Iraqi command to maneuver and defeat ISIL in the vicinity of Tikrit.”

Earlier Wednesday, Khalid Shwani, the spokesman for President Fuad Masum, said Iraqi and American officials had formed a committee of senior advisers to decide whether airstrikes would be beneficial.

“President Masum is expecting that the Americans will conduct airstrikes in Tikrit,” he said.

Using the Wall Street Journal, US officials have sent a message to Shia militias, fighting alongside Iraqi forces to retake Tikrit from the Islamic State: “We’ll help you with airstrikes…provided you detach yourselves from Iran.”

The offensive to reclaim Tikrit, held by the Islamic State since last June, has stalled for almost two weeks after initial advances near and inside the city.

Earlier, Hadi al-Amiri, the leader of the Badr Brigades militia, criticized Iraqi commanders for reportedly seeking US airstrikes: “Some of the weaklings in the army say we need Americans, while we say we do not need the Americans.”

Perhaps hoping to further divide the Iraqi army and the militias — if not to get the militias to push away Iranian support — the US officials told the Journal that “at the request of the Iraqi government, the U.S. military began providing aerial video” of Tikrit from surveillance aircraft.

However, this is only the leverage for a much bigger offer: The real-time aerial video surveillance sets the stage for the U.S. military to play a deeper role in the fight for Tikrit — if Iraq reduces its reliance on Iranian support.”

A “US defense official” linked the initiative to the stalling of the Tikrit offensive:

Right now, the Shiite militias are out there independently doing their thing—and failing. They’ve been failing for weeks now, and I think the Iraqi government is finally realizing that Iranian assistance is not going to get it done in Tikrit.

Another US defense official was even blunter: “The Iraqi partnership with Iran has proven unfruitful, and now it’s time for the Iraqis to come partner with us.”

Still, US airstrikes are far from imminent, even if the Iraqi armed forces lean Washington’s way. The sources said not only that Washington expects a public request from Iraqi leaders for help, but also oversight of the militias to ensure that Iran’s commanders are pushed to the side.

“It’s a possibility, but intelligence and surveillance doesn’t directly equate to targeting and lighting something up,” one official summarized.