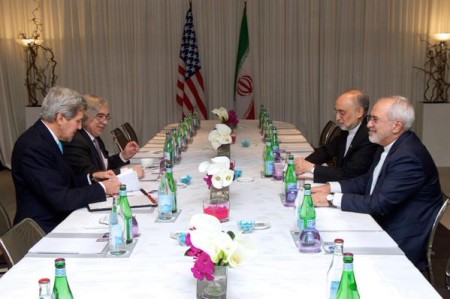 UPDATE 1700 GMT: A “senior US official” has reported “some progress” in nuclear talks, “sharpen[ing] up some of the tough issues”, but both the American and Iranian delegations said much remained to be done.

The US officials said discussions would resume talks next Monday at a venue to be decided, following the conclusion of two days of negotiations between Iranian Foreign Minister Mohammad Javad Zarif and US Secretary of State John Kerry.

Zarif confirmed next Monday’s meeting and said, “We had serious talks with the 5+1 representatives [US, Britain, France, Germany, China, and Russia] and especially with the Americans in the past three days….But still there is a long way to reach a final agreement.”

The senior US official echoed, “These were very serious, useful and constructive discussions. We have made some progress but we still have a long way to go. We did very much sharpen up some of the tough issues so we can work to resolution.”

However, Zarif again ruled out the US proposal for a “two-stage” process, with an agreement on General Principles by March 31: “Certainly, as long as an agreement is not reached on all issues, there will be no agreement on individual topics.”

UPDATE 0930 GMT: Foreign Minister Mohammad Javad Zarif and US Secretary of State John Kerry have resumed their discussions. They have been joined by the US and Iranian negotiating teams — including Hossein Fereydoun, the brother of President Rouhani — and the European Union’s deputy foreign policy head, Helga Schmid. 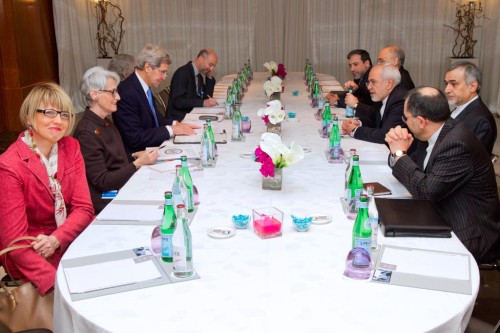 No significant news came out of Sunday’s nuclear talks between Iran’s Foreign Minister Mohammad Javad Zarif and US Secretary of State John Kerry in Geneva.

Instead, the Supreme Leader’s top aide, Ali Akbar Velayati, filled the void with a harsh statement about the US:

Undoubtedly, the Islamic Republic of Iran favors negotiations and it has announced its readiness for negotiations since the very first day that the issue of Iran’s nuclear program was raised and has never avoided negotiation.

But, it is wrong for the US to imagine and launch propaganda about the talks in a way as if the negotiations were an advantage that it is giving to Iran. It is them who need the negotiations.

Velayati’s comments, after a meeting with the UN Special Representative for Afghanistan, were another sign that any deal must be seen as one in which the Islamic Republic did not capitulate to US pressure and sanctions.

On Saturday, Kerry said President Obama was “fully prepared to stop these talks if he feels that they’re not being met with the kind of productive decision-making necessary to prove that a program is in fact peaceful”.

A member of the Iranian negotiating team in Geneva said, “Such comments are normal and natural,” only to be upstaged by Velayati’s intervention.

In Geneva, Zarif and Kerry sat down after two days of preparatory talks between their deputies and lead negotiators, as well as technical discussions. 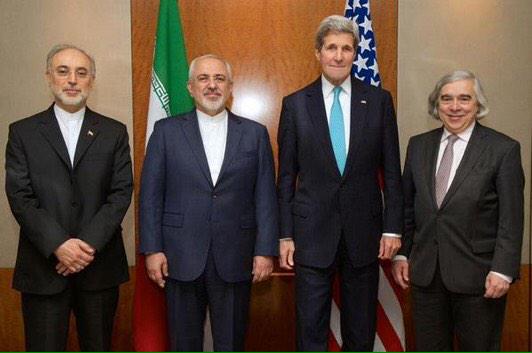 With few details offered, the signs have not been hopeful. Kerry said on Saturday that “significant gaps” remained between Iran and the 5+1 Powers (US, Britain, China, Russia, France, and Germany). Zarif repeated the Supreme Leader’s rejection of a US-proposed “two-stage” process — with an agreement on General Principles by March 31 and a comprehensive deal by a July 1 deadline — and insisted on a full and final resolution.

A leak from unnamed Western diplomats and “senior Israeli officials” indicated that the 5+1 Powers were standing on demands for a reduction in Iran’s capacity for uranium enrichment, shipment of almost all low-enriched uranium outside the country, and a lengthy process for the removal of US-led sanctions.

However, he warned, “If one side attempts to impose its will in the talks through means other than negotiating, we, too, will certainly be under no compunction to leave the negotiating table,” while adding, “But that is not the situation we are in right now.”

Discussions resume on Monday, with Kerry expected to leave Geneva in the evening.

Deputy Foreign Hossein Amir-Abdollahian has denounced Turkey’s weekend military intervention in Syria, moving the tomb of the grandfather of the Ottoman Empire.

Ankara sent in 39 tanks, 57 armored vehicles, and almost 600 troops to shift the tomb of Suleyman Shah, which has been besieged since last March by the Islamic State, closer to the Turkish border.

The statement echoed the Assad regime’s criticism of the intervention, saying it went beyond Ankara’s cooperation with the Islamic State, the Islamist faction Jabhat al-Nusra, and rebel groups.