Iran Daily, Feb 7: Nuclear Talks Between FM Zarif and US Secretary of State Kerry on Friday 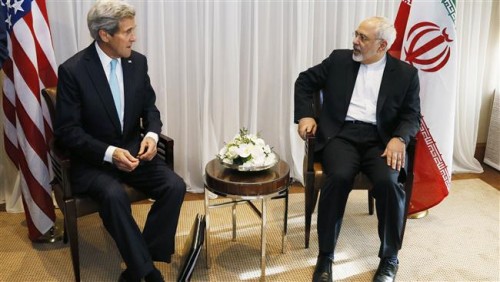 Iran’s Foreign Minister Mohammad Javad Zarif and US Secretary of State John Kerry renewed nuclear talks on Friday, speaking on the sidelines of the Munich Security Conference in Germany.

Iranian media had said the meeting would take place on Saturday, but the two men spoke for two hours about the current state of the prolonged talks seeking a comprehensive agreement between Iran and the 5+1 Powers (US, Britain, Germany, France, China, and Russia).

Zarif also is planning to meet other senior representative of the 5+1 countries while he is in Munich.

A “senior State Department official” said Kerry “reiterated our desire to move toward a political framework [for a settlement by the end of March”. He continued, “They agreed to stay in close touch and that they would try to meet again soon.”

Last month, Kerry and Zarif met for seven hours in Switzerland during week-long discussions between Iran and the 5+1. The talks failed to show any visible advance towards an agreement by a July 1 deadline.

Iran and the 5+1 Powers continue to debate the number and level of centrifuges for Tehran’s uranium enrichment, the lifting of US-led sanctions, and the duration of an agreement.

On Friday, however, no reporters or photographers were allowed to be present before they met and were instructed to wait in a lobby at the foot of the stairs from the meeting room. A State Department official said it was because the Iranians had a “limited amount of time meeting and wanted to use the time to focus on substance.”