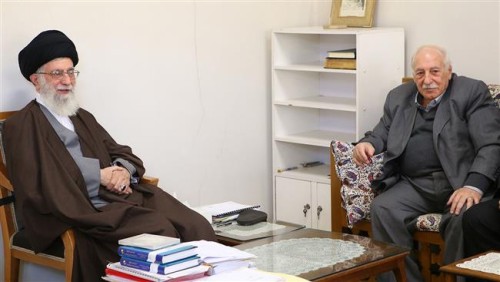 The Supreme Leader and Iran’s regime have launched another PR offensive over Palestine, hosting the leader of the Popular Front for the Liberation of Palestine — General Command.

Ayatollah Khamenei declared in his photo opportunity with Ahmad Jibril, “The Islamic Republic of Iran will stand firm until the day when the cause of Palestine is realized, and our youths will certainly see that day.”

The Supreme Leader commended the PFLP-GC head as “one of the pillars of the issue of Palestine” and expressed hope that Jibril would “continue resistance with this spirit until the final victory”.

Iran has stepped up its rhetorical declarations on Palestinian “resistance” since last summer’s Israel-Gaza War, declaring that Palestinians in the West Bank and Gaza should be armed against the Israelis.

Tehran has also hosted leaders of the PFLP-GC and Islamic Jihad. It has been hoping for a visit from Hamas head Khaled Meshaal: the Gazan leadership has sent other officials to Iran this month, but — having distanced itself from the Islamic Republic over the Syrian crisis — has held back from a Meshaal reconciliation in Tehran.

Defense Minister Hossein Dehghan supported the Supreme Leader’s initiative on Tuesday, while extending it to Iranian support of the Lebanese organization Hezbollah, “The constant and general policy of the Islamic Republic is arming the West Bank and strengthening the resistance stream and Hezbollah forces to confront the Zionists’ usurping and occupying regime.”

And the Deputy Commander of the Revolutionary Guards, General Hossein Salami, said, “Opening a new front in the West Bank, which is a major part of our dear Palestine, surely will be on the agenda, and this matter is part of the new reality…which will gradually be revealed.”

Interior Ministry: We Have Arrested 20 Members of Jaish ul-Adl Insurgency

Iran’s Interior Ministry claimed on Tuesday that it has struck a blow against the Sunni insurgency Jaish ul-Adl, active in southeast Iran near the Pakistani border.

Amiri gave no details about the location or date of the arrests.

Ahmadinejad: The Corruption of My Vice-President Had Nothing to Do With My Government

Former President Mahmoud Ahmadinejad has said that the fraud conviction of his 1st Vice President, Mohammad Reza Rahimi, had nothing to do with his Government.

Ahmadinejad’s office issued a statement that the insurance fraud occurred before Rahimi was appointed in autumn 2009. It chided “relentless attacks” against the former Government, claiming “certain people and groups” were trying to take political advantage.

The statement said the President, who is still a member of the Expediency Council, and his senior officials had remained silent against “baseless accusations” to safeguard the country’s interests, but “the truth will out”.

The former Vice President was initially given a 15-year term, but the Supreme Court reduced the punishment.

State websites and newspapers have come to the defense of Iranian Foreign Minister Mohammad Javad Zarif, after he was attacked last week by hardline MPs and media outlets.

The English-language Iran Daily denounces the hardline criticism of Zarif for going to France, just after the publication of a Prophet Mohammad cartoon by the Charlie Hebdo satirical magazine, as “politically motivated and absolutely illogical and unscholarly”.

Zarif was meeting European officials amid ongoing talks over Iran’s nuclear program, but the hardliners said he was selling out Iran’s interests. They also chided his caution last year that one US missile could take Iranian defenses.

Iran Daily responds that “the issue” over Charlie Hebdo, which was attacked by gunmen earlier month with 12 people killed, “should not overshadow other issues such as nuclear negotiations which are critical for the country’s economic and political prospects”.