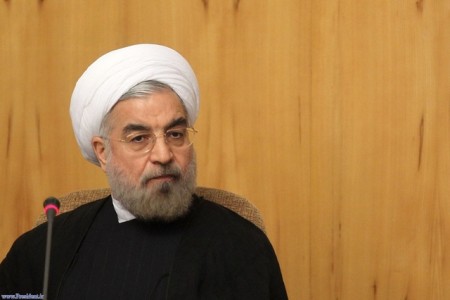 Using the catalyst of the death of Saudi King Abdullah, Iran’s Rouhani Government has made a diplomatic move for engagement with Riyadh.

I hope that in the time lying ahead, with regard to the religious and historical bonds between the Islamic Republic of Iran and the Kingdom of Saudi Arabia, the relations between the two countries expand in all areas of mutual interest.

Even more striking was the suddenly-arranged attendance of Foreign Minister Mohammad Javad Zarif to Saturday’s service for King Abdullah.

Since its inauguration in August 2013, the Rouhani Government has pursued a summit in Saudi Arabia, but it has been repeatedly checked by hardliners within Iran and by Saudi caution. The prospects appeared to diminish further this winter with Iran’s worries over falling oil prices, as its leaders accused Saudi Arabia of involvement in a “foreign plot” against the Iranian economy.

However, last week the regime suddenly changed tack, amid the fall of the Government in Yemen — a country of concern both to Iran and Saudi Arabia — and the continuing campaign against the Islamic State. Tehran’s top official for the region, Secretary of the National Security Council Ali Shamkhani, said Iran would welcome discussions with Riyadh on all issues.

Iranian media are reporting a statement by President Rouhani’s senior advisor which, if true, points to the seriousness of Iran’s economic crisis.

Mohammad-Baqer Nobakht said Saturday that the Government is now operating on a budget of less than $40 billion because of the sharp fall in oil prices, the main source of revenues.

Nobakht, who also is head of the Management and Planning Organization, compared the figure to a previous operating budget of $55-$60 billion: “The current prices of crude oil in international markets have delivered a shock to Iran’s economy.”

Speaking at an economic conference in Tehran, Nobakht insisted that the Government will stay afloat through the Supreme Leader’s proclaimed “Resistance Economy”. He said the long-term solution is to reduce Iran’s dependence on oil revenues while increasing efficiency.

Iran’s Lead Negotiator Cautious About Latest Nuclear Talks With US

Without giving details, Iran’s lead negotiator has expressed caution about this weekend’s nuclear talks with the US in Zurich, Switzerland.

Deputy Foreign Minister Abbas Araqchi said two-day discussions with the American delegation, led by Undersecretary of State Wendy Sherman, were “constructive” on “important subjects such as [uranium] enrichment and sanctions, which have exhaustive and complicated details”.

However, he indicated that no progress had been made on closing the gaps, while hinting that the differences should be brought out in public: “We are in a situation, where the details and general issues should be discussed alongside each other. All the details should come to light.”

The Iranians and Americans were also joined by the European Union’s deputy foreign policy chief, Helga Schmid. The talks were preceded on Friday by a brief discussion between Iranian Foreign Minister Mohammad Javad Zarif and US Secretary of State John Kerry in Davos, Switzerland.

The Iranian Foreign Ministry indicated the discussions between Iran and European members of the 5+1 Powers (US, Britain, Germany, China, Russia, and France) will be in Istanbul on January 29.