Israel-Palestine Daily, Dec 13: US Tries to Hold Back Palestinian State — But Is Europe Listening? 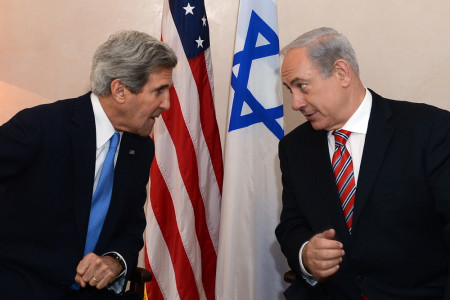 US Secretary of State John Kerry is trying to hold back a campaign in the UN for a State of Palestine — but his European partners may not be listening.

Kerry told reporters Friday that he hoped to head off a showdown at the UN, through meetings next week in Europe:

There are a lot of different folks pushing in different directions out there, and the question is can we all pull in the same direction….

What we’re trying to do is figure out what makes sense. We’re trying to figure out a way to help defuse the tensions and reduce the potential for more conflict, and we’re exploring various possibilities to that end, which is why I’m also meeting with [Israeli] Prime Minister Netanyahu.

Palestinian official are hoping to submit a draft resolution this month to the UN Security Council, setting out a timetable of 2 or 3 years for an Israeli withdrawal to the 1967 borders between Israel, the West Bank, and Gaza.

As Kerry tried to stem the effort, the Portuguese Parliament became the latest European body to call for recognition of an independent Palestine “in coordination with the European Union.”

France’s upper house voted Thursday to urge the Government to recognize Palestine, as did the Irish Parliament on Wednesday.

Lawmakers in Britain and Spain have passed similar motions. Sweden’s legislators went farther by officially recognizing the State of Palestine, prompting Israel to recall its ambassador from Stockholm.