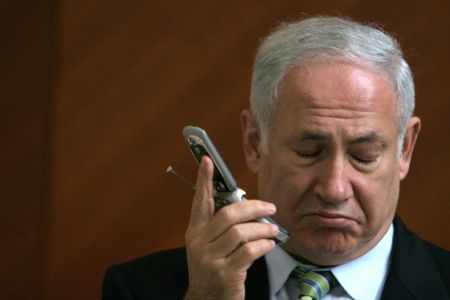 UPDATE 1830 GMT: In a speech on national TV, Netanyahu has issued more condemnation of the Ministers he dismissed earlier Tuesday:

Accusing Lapid and Livni of trying to “organize a putsch” against him, Netanyahu said that “it is impossible to do all the things that are important for the security of the State of Israel” with the current Government.

Livni and Lapid were the leading centrist Ministers in a Cabinet in which Netanyahu has faced increasing pressure from right-wing colleagues such as Economy Minister Naftali Bennett. Both had recently challenged the Prime Minister’s attempt to enshrine Israel as a “Jewish State” in its constitution and laws.

Netanyahu said in a statement:

In recent weeks, ministers Lapid and Livni attacked harshly the government I head.

Lapid’s Yesh Atid Party responded that Netanyahu’s “haphazard move of firing the ministers is an act of cowardice and loss of control”. It asserted, saying its remaining Ministers would resign:

Prime Minister Netanyahu has failed in his management of the country and in dealing with the needs of the Israeli public. We are sad to see that the prime minister has chosen to act without consideration for the national interest and to drag Israel to unnecessary elections which will harm the economy and Israeli society, all for narrow political interests and a surrender to the ultra-orthodox parties, the powerful central committee of the Likud and outside lobby groups.

Livni said after a meeting with Netanyahu on Tuesday, “Already yesterday at midnight it was clear that we’re going to elections….Netanyahu and I came from the same political home, but each of us took it in a different direction.”

On Monday, Lapid rejected a series of demands from Netanyahu for the continuation of the coalition. These included a cessation of
criticism of the Government, transfer of 6 billion shekels to the defense budget, release of funds needed by the military to relocate to the south, and backing of the “Jewish State” legislation.