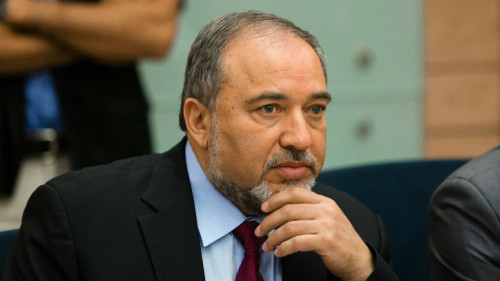 The outburst of Lieberman, who heads the right-wing Yisrael Beytenu Party, was spurred by the remark of a Likud MP who said a vote in March for Yisrael Beytenu would bring a left-wing government.

The Foreign Minister snapped that Likud is “hysterical, just like the Jewish Home [Party]” of Economy Minister Naftali Bennett.

Lieberman said his party is not looking for political mergers, but he did not rule out joining a Government coalition headed by the Labor Party’s Isaac Herzog and Tzipi Livni — recently fired by Netanyahu as Justice Minister — of the centrist Hatnua.

The Foreign Minister also aimed at Netanyahu, sayuing the Prime Minister had not benn firm enough against Hamas in this summer’s war in Gaza.

During [Operation] Protective Edge I said we mustn’t be drawn in, but we were [drawn in], we didn’t initiate. I [told the Cabinet]: Go all the way, don’t be “laflaf” [nerds].

Likud hit back in a statement:

[The Prime Minister] managed the operation firmly and responsibly, together with the Defense Minister and [military] Chief of Staff, and wasn’t dragged by a variety of different suggestions.

The operation was governed with a broad view of safeguarding the security of the state and the lives of the citizens and IDF soldiers.

It then repeated the claim that sparked Lieberman’s ire:

[His] remarks concerning his willingness to sit in a government led by [Labor’s Isaac] Herzog prove that a vote for Lieberman is likely to shift votes from the right to the left and bring about the formation of a left-wing government.