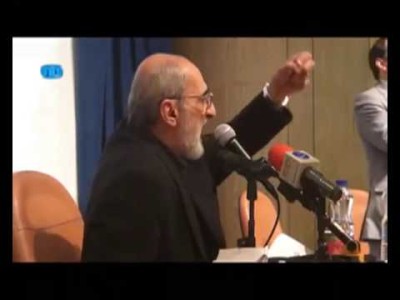 On Monday, the editor of Iran’s hard-line Kayhan newspaper faced an unexpected challenge from the TehranUniversity students whom he was addressing.

Hossein Shariatmadari, chosen by the Supreme Leader to run Kayhan, was warning against “sedition” and declaring that protests might anger students — presumably the majority, in Shariatmadari’s eyes — whose viewpoints are not reflected in public demonstrations.

While some students supported the speech with the chant, “Death to the seditionists”, at least part of his audience was not convinced and challenged Shariatmadari with chants. The editor tried to mock them by “translating” their signs: “[Billionaire philanthropist] George Soros, we love you! [US political writer] Michael Ledeen, we love you! America, we love you! Israel, we love you!”

The protesters refused to be silenced, shouting, “Interrogator, get lost”; “God willing, get lost and don’t come back”; “Death to the Islam of the Taliban”; “Shame on you, let the university be!”; and “Freedom of thought can’t be achieved with a long beard!”

And then there were the chants for Mir Hossein Mousavi, the leading candidate in the disputed 2009 Presidential election who has been held under strict house arrest, along with his wife Zahra Rahnavard and fellow 2009 candidate Mehdi Karroubi, since February 2011.