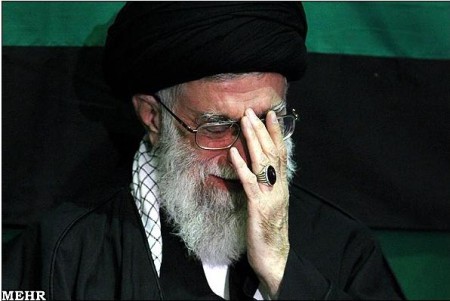 This week, President Rouhani presented a draft Government budget for 2015/16 to Parliament of 8,379 trillion Rials (about $294 billion at the latest official exchange rate). Despite a drop of more than 40% in oil prices since June — and thus the Government’s main source of revenue — the budget is a 4% increase on 2014/15.

Unsurprisingly, Rouhani has offered the budget as a sign of Iran’s resilience amid US-led sanctions. He has hailed it as part of the Supreme Leader’s “resistance economy”, promoted since 2012 as the answer to the international pressure. He has said that Iran will sharply increase its non-oil revenues, as the spirit and ability of Iranians leads to innovation and new production.

Don’t believe the bluster. The President and his inner circle are worried. Very worried.

Rouhani and his officials, including 1st Vice President Eshagh Jahangiri, have betrayed the concern since Sunday’s presentation to the Majlis. They have exposed their worry over the falling oil price — from almost $120/barrel in June to $65/barrel since June — by denouncing a “foreign plot” against Iran and the Islamic world.

See Iran Daily, Dec 11: Is Rouhani Panicking Over the Economy?

And if you take apart the budget, you’ll see why. Here are the signs of crisis:

For all the numbers and projections, the core problem for the Government is easy to see: it does not have the money to fund its activities.

So — assuming that Iran’s export levels remain the same — that is an effective 28% cut in revenues. Even if you accept the palliative of Presidential senior advisor Mohammad Bagher Nobakht that oil only provides 1/3 of the Government’s funds, that is still a 10% shortfall in the budget, compared to last year.

How can the gap be covered?

On paper, the Government quickly reduces the 28% fall in oil revenues to only 8%. Part of the magic is a recent devaluation of the Iranian currency by about 9% — thus increasing the nominal Rial value of the oil income received in US dollars. The same maneuver reduces the dollar equivalent of the budget by about 3% from $303 billion in 2014/2015.

Then — again on paper — the Government posts a projected 22% increase in tax revenues and a 27% increase in income from privatization and financial transactions.

Part of the optimism may prove to be justified. Changes in value-added tax should bring in some additional money, and Rouhani’s speech to Parliament spoke of the transfer of Government development projects to the private sector.

But there are many assumptions in that optimism. Increase in tax revenues comes from an expanding growth. Even though the Rouhani Government has checked the decline of almost 6% in GDP in the last year of the Ahmadinejad Administration, the most optimistic projections for 2015/2016 are of a slight increase in GDP — and the Government’s top officials have said their target is just getting back to zero growth.

Similarly private companies are likely to be hesitant to pick up State enterprises which are troubled in an economy which still faces recession. And, unsurprisingly, they will be only take on those of Rouhani’s “half-completed development projects” which show an immediate prospect of profits — the less promising enterprises will continue as a drag on the budget.

The same problem with wish fulfilment applies to Rouhani’s other major palliative: a projection of a 20% increase in revenues from non-oil products.

The actual numbers for those revenues is hard to obtain, as State media has spent years putting out random sets of glowing numbers for the non-oil sector. What is more telling are the challenges that Iran faces: the effect of sanctions on financial transactions for exports; instability in Iraq, one of Iran’s main markets; and the uncertain prospects for a projected rise in tourism, especially if no nuclear deal is reached with the 5+1 Powers.

So — and this is a best-case scenario — the Government might cover the hole in its figures if:

1. The oil price does not fall any farther in 2015-2016 and/or Iran can somehow increase oil exports amid sanctions.
2. The State increases the tax burden on Iranians.
3. The State sells off some of its best assets to the private sector.
4. The State weakens the Iranian currency.
5. Iran can sustain a lasting growth in non-oil exports.

2. THE CUT IN SERVICES AND INCREASED BURDEN ON IRANIANS

Here’s a number that Rouhani did not mention in his budget presentation: even with its 4% increase in spending, the budget is at least a 9% “real” cut in Government operations and services.

The Government is increasing its spending on operations by 11%. However, Rouhani projects an inflation rate of 20% for 2015/2016 — wiping away the nominal rise in expenditure.

And 20% inflation could represent a “best” estimate. Iran’s currency devaluation — which is even greater in the unofficial market — the pressures on production, and reductions in Government subsidies on items such as bread could all push the inflation rate higher, if not as high as the 45% at the end of the Ahmadinejad administration.

That may be only the start of the constriction on the Iranian public, because some of the Government’s increase in operations is not going to social services. Instead, the Iranian military gets a 32% increase to $12.6 billion, and civil servants are given a 17% pay rise.

A significant exception is health care, where the Government is planning a 58% increase in the budget to $14.1 billion, making an increased contribution to costs and insurance coverage.

Hpwever, at the same time, the Government is slashing the effective amount of cash handouts — covering subsidy cuts since December 2010 — by about 26%, even though it claims it will maintain the current monthly payment to individuals and families.

The reasons? Elimination of higher-income groups from the handouts might spare many Iranians, but a likely third phase in subsidy cuts for fuel, leading to higher prices, will hit all of them.

It certainly looks like the Supreme Leader is getting the “resistance economy” he has offered since 2012. Iranians will be expected to endure inflation of at least 20%, declining value in their currency, and a reduction of Government services in some areas, with little prospect of recovering production to cover the oil price shock.

Rouhani’s anger in mid-week over the “foreign plot” tipped off that he knows the reality of “resistance”.

Salvation could come through a resurgent oil price, but that looks unlikely in the short term. It could come through a nuclear deal and a lifting of sanctions, but that too seems a distant prospect. That means salvation will have to come through the acceptance of many Iranians of increasingly difficult conditions, on top of years of downturn and periodic crises.

So the economic question becomes a political one: how long will they continue to accept?