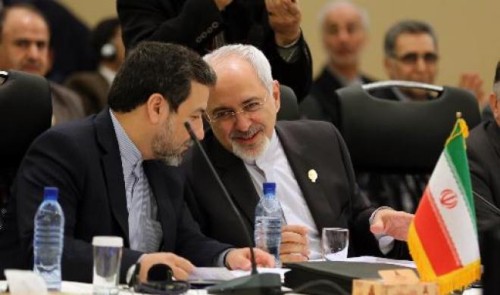 LATEST: Ex-President Khatami — When the Supreme Leader Supports Rouhani…And When He Doesn’t

Iran’s nuclear negotiators, under fire from the Revolutionary Guards and hardline critics earlier this week, received more backing from the Supreme Leader on Friday.

The Guards and hardline outlets had challenged the negotiators as weak, failing to defend the Islamic Republic’s interests, after the latest talks between Iran and the 5+1 Powers failed to conclude a comprehensive agreement on Monday. Instead, the two sides extended an interim agreement over the Iranian nuclear program to July 1.

However, the Supreme Leader used a Thursday speech to assure, “Iran’s nuclear delegation is truly diligent and serious,” and the Tehran Friday Prayer maintained the backing of the team, led by Foreign Minister Mohammad Javad Zarif and Deputy Foreign Minister Abbas Araqchi.

Ayatollah Mohammad Emami Kashani said the negotiators had led the world to recognize that the Islamic Republic does not seek nuclear arms, “They have come to realize what our logic is. Our logic is that nuclear weapons are haram [religiously forbidden].”

Fars News, the outlet of the Revolutionary Guards, pulled back from the challenge to the Rouhani Government on Friday. Instead, it features the comments of MP Hossein Sobhaninia, after a 45-minute closed-door session in Parliament with Foreign Minister Zarif, emphasizing the support for the negotiators.

Former President Mohammad Khatami has made some revealing remarks about the pressure on the current President, Hassan Rouhani, on political and cultural issues.

Speaking to university students, Khatami said Rouhani’s opponents are declaring, “We are still here and have power and will not let things happen the way you want them to.”

His most telling remarks, however, were over the Supreme Leader’s position in the conflict. He noted Khameni’s backing for the Government over nuclear talks with the 5+1 Powers:

They try in every field in which they have influence to have their way, even over the issue of nuclear negotiations. However, fortunately, the Leader is providing good support and wants the issues to be resolved honourably while also protecting national and revolutionary interests.

However, Khatami said that where there is no support from the leader, Rouhani’s opponents were having an “adverse effect”.

He implied that one of those issues was the 45-month house arrests of opposition leaders Mir Hossein Mousavi, Zahra Rahnavard, and Mehdi Karroubi.

Rouhani had promised in his 2013 campaign that he would release political prisoners such as Mousavi and Karroubi, both candidates in the 2009 disputed Presidential election, but the Supreme Leader has refused to back the initiative and said the detained leaders should be grateful that they have not been tried and put in prison or even executed.