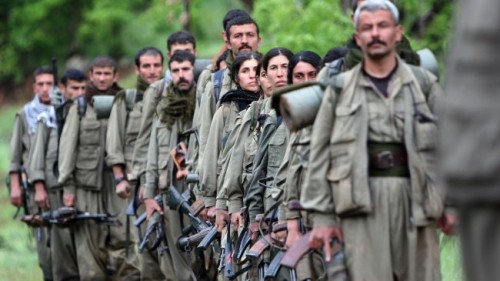 LATEST: 18 Workers Trapped in Mine in Karaman Province

The Kurdistan Workers Party (PKK) has declared the end of the “peace process” with Turkey’s Government.

The PKK issued a statement, following last week’s central committee meeting in the Qandil Mountains of Iraq, saying that the ruling AKP party has already ended the process with its crackdown against southeastern Turkey’s predominantly Kurdish communities.

Widespread protests, in which at least 38 people were killed, were staged in the region last month criticizing Turkey’s indecision over support to the besieged Kurdish center of Kobane in northern Syria.

The Turkish Government started negotiations in 2012 with Kurdish groups, including the detained leader Abdollah Ocalan, to end 30 years of violent conflict over the status of Turkish Kurdistan.

The PKK also said a “global democracy front” has been fostered by the Kurdish fight in Kobane against the Islamic State, with security cooperation between Turkish, Syrian, and Iraqi Kurds.

Following a week of meetings between Kurdish factions in northern Iraq, the PKK said it will restore its ties to the Syrian umbrella group Kurdistan Communities Union (KCK).

At Least 18 Workers Trapped in Mine in Karaman Province

At least 18 miners are trapped after a mine collapse during a flood on Tuesday in Karaman Province in central Turkey.

Under Turkish labor laws, the mine is supposed to be drained every two weeks; however, this has reportedly not been done in recent months. W

About 70 search and rescue personnel are attempting to free the trapped miners. Many of them also tried to save the 301 victims of the May 2014 Soma mine disaster.

The Soma disaster led to a series of protests across Turkey over the failure of the Government to ensure safety.

Authorities said a group of masked men opened fire with shotguns on the police headquarters in Diyarbakir’s Yenisehir District on Tuesday night.

No injuries were reported in the shootout.

Authorities said the masked men, who fired on a Turkish armoured vehicle during their escape, were supported by a power outage.