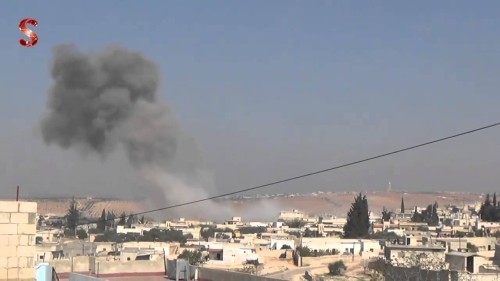 UPDATE 1815 GMT: Amid the conflicting claims over the state of the insurgent attack on Idlib, it appears that opposition fighters have pulled back from the city but continue to hold the surrounding checkpoints that they took this morning.

Mustafa al-Gharib, an activist in Idlib city, confirmed that insurgents temporarily took over the Governorate building and killed a number of soldiers before withdrawing.

The Idlib Province police chief confirmed the attacks, saying insurgents took advantage of a power cut before dawn to hit the checkpoints and the governor’s office. He claims troops had repelled the attackers: “There isn’t one gunman in the city now.”

Insurgents have launched a major attack on Idlib in northwest Syria, taking key positions on the edge of the city and in the industrial area.

Opposition fighters have long controlled most of the province around Idlib, but Syrian forces have maintained control of the city throughout the uprising.

Insurgent forces, including Jabhat al-Nusra and the Free Syrian Army, attacked this morning from the north, south, and west and captured several checkpoints on the perimeter of the city. They then moved on positions such as the stadium and the College of Education.

Insurgents reportedly are also in the industrial area east of the city and have taken the Governor’s Palace. They said they have cut a main highway into Idlib.

A clash at one of the checkpoints:

The insurgents claim dozens of regime casualties, with the capture of 12 troops, and the seizure of two tanks and destruction of three others.

City authorities have declared a curfew, and the Syrian military is counter-attacking from the air, including bombing of the area of al-Mastoumeh.

A military source said that units of the armed forces in cooperation with the popular defense forces foiled an attempt by members of Jabhat al-Nusra terrorist organization to infiltrate into Idleb city from several directions, leaving large numbers of them dead.

Normal life returns to prevail in the city.