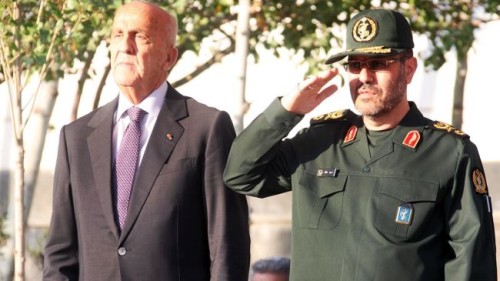 Trying to maintain its influence in Lebanon — and to counter that of Saudi Arabia — Iran is persisting in its effort to get Beirut to accept military aid.

The Islamic Republic of Iran, with the aim of consolidating national authority and reinforcing security in Lebanon, is ready to supply the needs of the Lebanese army, and share its experience with this country’s army for fighting terrorist and Takfiri groups.

He said Iran valued its ties with Lebanon as “an independent, stable, and geopolitically-important country”.

Last month Tehran offered the aid in a visit by Shamkhani to Beirut.

Initial reports indicated that Lebanon would take the assistance. However, last week Prime Minister Tammam Salam delayed any Cabinet discussion amid reports of division between the Government’s two main factions, Hezbollah and the al-Mustaqbal Movement, as well as of US pressure for a postponement.

Saudi Arabia granted $1 billion in military aid to the Lebanese in August. At the start of the year, France announced a $3 billion deal with Beirut.

However, within days of Iran’s announcement of its assistance, Saudi Arabian officials indicated they would hold up the French supplies, saying they had “questions” about the arrangement.

The deputy commander of the Islamic Revolutionary Guards Corps, General Hossein Salami, has warned of more Iranian attacks inside Pakistan after a deadly border clash between the two sides on Friday.

Two Iranian border guards and a Pakistan soldier were killed, and four Pakistanis wounded, in the firefight. After the clash, the Iranian military fired mortars on a Pakistan border town in the sparsely-populated region.

Tehran’s warning follows attacks on its security forces by Sunni insurgents in Sistan and Baluchestan Province in southeastern Iran. Last week it demanded that Pakistan take action against those operating from a sanctuary inside its territory.

Salami, visiting Sistan and Baluchestan, told reporters that Tehran’s policy of non-interference in others’ internal affairs would change if “we feel that Pakistan and other neighbors show incompetence in dealing with threats against Iran from their side of borders”.

He added, “Sistan and Baluchestan is a geostrategic region for the Islamic Republic of Iran, and its security and development is a priority for the country….The IRGC sees no limits in fighting these opposition groups.”