Iraq Feature: What if the Islamic State Can’t Run the Banks in Mosul? 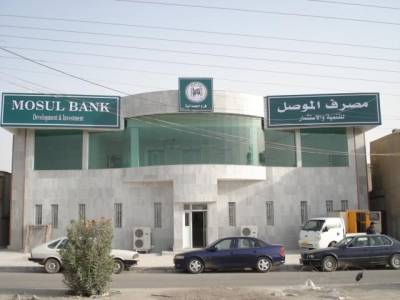 Much of the media’s coverage of Islamic State portrays it as a menacing force because of its military successes in Iraq since the start of the year and especially since June.

However, that military advance — which has been checked and pushed back in recent weeks by Iraqi and Kurdish forces, supported by the US and Iran — does not necessarily translate into successful rule by the Islamic State. It is one matter to claim territory; another to provide for the residents after the “victory”.

Writing for Niqash, Khales Joumah offers a notable example — how will the Islamic State ensure that the banks continue to function in Mosul, Iraq’s second-largest city which they took in June?

Up until now, locals in Mosul, the northern city under the control of Sunni Muslim extremists, have not been able to withdraw their money from their bank accounts. That changed last week. However every withdrawal comes with conditions, including a three-person committee that asks where the money came from and a compulsory tax for funding the Islamist’s Caliphate.

Locals in the northern Iraqi city of Mosul have been allowed to enter neighbourhood banks for the first time since Sunni Muslim extremists took over the city. Before this fighters from the group now known as the Islamic State, or IS, have been guarding the banks and not allowing anybody inside.

A day after the official IS radio station in Mosul, Al Bayan, broadcast the message about the banks being re-opened, there was a long queue outside Branch 112 of the Rafidain Bank.

“The instructions that the IS group gave were shocking to anyone who has a bank account”, one of Branch 112’s employees whispered to a cement merchant, Abdullah al-Jibouri, who had come into the bank.

To withdraw money the holder of any bank account has to submit a statement to a three-person committee, all of whom are members of the IS group. The members of the group are allegedly experts in finance.

The committee would also check that the accounts did not belong to, or were connected to, any government institution. Nor could they be in the name of any wanted individuals that the IS group was seeking, or in the name of any Christians, Yazidis, Shiite Muslims or Sunni Muslims that the IS fighters considered an enemy — for example, members of the security forces or local politicians.

If all of these conditions are fulfilled and the account holder gets the committee’s approval, then money may be withdrawn.

“But the real problem is the amount that the IS group allows people to withdraw,” the bank employee explained to the merchant. “People who have approvals are only allowed to withdraw 10% of the balance in the account, on the condition that the withdrawn amount isn’t more than IQD10 million [around US$6,500].”

“It’s just all deception and fraud,” al-Jibouri said, folding up his papers and leaving the bank without withdrawing any money.

“Most of the people who have larger amounts in their accounts are taking their time about this. They don’t want to reveal how much they have in case they are asked to pay money to finance IS fighting,” he explained to his family when they asked him why he had returned empty-handed.

As some reports have suggested, although the IS group has a big budget from various sources, this is still not enough to fund their many military and social activities currently.

Despite all of the concerns that locals have about withdrawing their money from the IS-controlled institutions, there were still long queues in front of Mosul’s banks.

“No matter how small the amount, something is better than nothing,” al-Rashidi told NIQASH. “And there are no guarantees that there will be money here in the future. Maybe the banks will all be robbed and any relevant documents destroyed – especially as the IS is incurring losses,” he suggested.

According to al-Rashidi and the other Mosul people who were waiting in line, getting money was a long and difficult process. The trickiest part was going before the IS’ financial committee and answering their question: “how did you acquire these funds?”.

Additionally when lining up to see the committee and get permission to get money out, the IS fighters always get priority, locals say. Often they also jump the queue.

One local tried to protest when fighters broke into the line ahead. But the gunman turned and stared at him, telling the crowd angrily that, “we don’t have time to waste standing in line, we are fighting on the front lines”.

One engineer who works in the city’s power department was surprised to see that the salary he hadn’t received for a long time was smaller than usual; about 5 percent had somehow gone missing.

The IS group has already confiscated the salaries of local Christians and Shiite Muslims but it seems that now the Caliph’s hands are stretching out for more cash. The engineer asked about the missing money and was told that 5 percent was being deducted from all salaries and being deposited in the group’s “Bayt Al Mal”, a traditional Islamic treasury where funds for social welfare and other public purposes are stored.

Not everyone earning money has become a victim of the IS group’s dubious accounting practices. Some employees, of institutions like Mosul’s courts, provincial government and universities, have been being paid in secrecy.

The money is transferred from Baghdad to one of the nearby cities that are not under the control of the IS group, such as Kirkuk. After this the money is smuggled into Mosul in cash and salaries are then distributed to the different heads of department in secret, and they in turn pay their employees in secret.

One accountant who was involved, and therefore could not be named, said this was being done because otherwise the IS group would confiscate the payments.