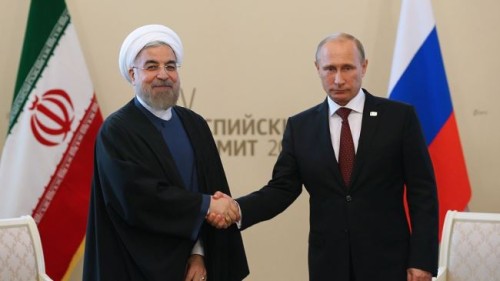 Taking his engagement from the UN to Russia, President Rouhani met Russian counterpart Vladimir Putin on Monday, as Iran seeks economic backing from Russia and considers its next step in the Syrian crisis.

Rouhani put out standard comments about the importance of ties between Tehran and Moscow: “The importance of Russia has increased in Iran’s regional and strategic relations and numerous meetings between the two countries’ officials are a proof of the consolidation of ties and the two sides’ determination to expand them.”

Facing continuing economic difficulties and sanctions, Iran has tried to relieve pressure with the bolstering of trade with Russia, including a proposed — but still uncompleted — barter proposal exchanging Iranian oil for Russian manufactured goods and equipment for infrastructure.

Rouhani also implicitly referred to Syria, where both Iran and Russia have propped up the Assad regime in the 42-month conflict, as well as the US intervention against the Islamic State:

Those who currently intend to lead the fight against terrorists in the region have started to pay attention too late. This is among the Iranian nation’s honors that it identified the danger before others and fought it.

Rouhani is spending two days in Russia during the 4th summit of the Caspian Sea Littoral States in Astrakhan.

Eighteen Nobel laureates in physics have written the Supreme Leader to call for the release of the physicist Omid Kokabee.

Kokabee, who was pursuing a Ph.D. at the University of Texas, was detained during a visit to Iran in January 2011. Charged with “communicating with a hostile government” and receiving “illegitimate funds”, he was given a 10-year sentence. He is reportedly suffering from heart, kidney, stomach, and dental illnesses.

The open letter was published in the scientific journal Nature: “Omid Kokabee is an individual who has stood by his moral principles and we urge you to exhibit compassion and allow him to return to his studies in order to fulfill his promising potential.”

The laureates said the charges against Kokabee were “spurious” and “related to legitimate scholarly ties with academic institutions outside of Iran”.

Kokabee said in April 2013, in a letter smuggled out of Evin Prison, that he was seized after he refused to collaborate on a military research project.

Ghoncheh Ghavami, a British-Iranian woman detained in June for trying to enter a stadium to watch a men’s volleyball game, has finally been charged with “propaganda against the regime”.

Ghavami’s lawyer said his client has pleaded not guilty.

Ghavami was among a group of women seized as they tried to attend the Iran-Italy men’s match in the World Volleyball Championships. She was released on bail after a few hours but arrested again when she went to Evin Prison to collect confiscated possessions.

Iran’s judiciary said earlier this month that her arrest has nothing to do with sports but could not give a charge.

Military Renews Attacks on US As “Creator” of Islamic State

With President Rouhani now out of New York and the UN, Iran’s military has resumed its hostile rhetoric against the US over the Iraqi and Syrian crises.

Even though Washington is attacking the Islamic State in both countries, Iranian commanders — worried about the US intervention — are insisting that the Americans are allied with the jihadists.

Based on the intelligence, news and analyses we have, the foreign spy agencies, headed by the US, created, managed and supported the Islamic State and regional terrorists logistically.

Such cooperation still continues and the Americans seek to fool the public opinion under the pretext of confrontation with the terrorist group.