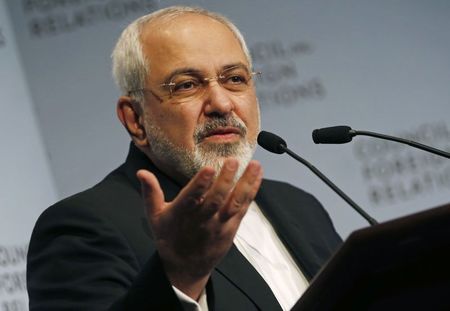 LATEST: Rouhani on Detained Journalists Jason Rezaian & Yeganeh Salehi “There Are a Lot of Prisoners in the World”

As nuclear talks resume between Iran and the 5+1 Powers (US, Britain, Germany, France, China, and Russia) in New York, Iranian Foreign Minister Mohammad Javad Zarif has declared that “any deal” is better than “no deal”.

Iran and the 5+1 Powers are seeking a comprehensive settlement before the expiry of interim arrangements on November 24.

Zarif reopened the discussions with the European Union’s Catherine Ashton, the lead negotiator for the 5+1, at a Wednesday lunch. He also spoke during the day to influential American groups such as the Council on Foreign Relations.

The Foreign Minister declared, “I think if you compare any deal with a no deal, it’s clear that a deal is much preferable.” He blamed opponents in Western countries for any difficulties:

I still believe [a final deal] a possibility. The only problem is how this could be presented to some domestic constituencies — primarily in the United States, but even in places in Europe — that could please them, or some may say could appease them because some of them are not interested in any deal.

The Foreign Minister and the Rouhani Government have also faced the challenge within Iran of the Supreme Leader’s criticism of the US as “dishonest” and “hypocritical” in negotiations.

The leading issue of dispute between Iran and the 5+1 is the number and level of Tehran’s centrifuges for enrichment of uranium to 5% in a civil nuclear program.

Asked by US NBC Television about the detained husband-and-wife journalists Jason Rezaian of the Washington Post and Yeganeh Salehi of The National, held for more than two months, President Rouhani replied:

There are a lot of prisoners in the world, and there are a number of Iranians imprisoned by the Americans….The people you refer to…are Iranian nationals, and perhaps there are people for security or non-security reasons [who] have been detained within the framework of the Iranian judiciary.

Asked about the condition of Rezaian and Salehi, Rouhani did not give a specific answer but assured, “There is no problem for all the prisoners in Iran.”

The Friday Prayer Leader of Mashhad, Ayatollah Alamalhoda, is the latest cleric to denounce Government plans to improve internet access.

The [Supreme] Leader announced that high-speed internet should be avoided, but we know that his recommendation has been overlooked. All our young people now have internet in their pockets, and this on its own promotes corruption.

Other clerics like Grand Ayatollah Makarem Shirazi have attacked the Internet plan, and hardline MPs have threatened the Communications Minister with impeachment.

President Rouhani tried to counter last week, saying that it is not proper that Iran’s students have to waste hours trying to get information from the “snail-like” Internet. He declared that restrictions on access will hold back Iranian progress.

President Rouhani has repeated his statement that a US-led coalition against the Islamic State is “ridiculous” — and this time he said it to an American TV channel.

In an interview at his Presidential Palace with NBC News, Rouhani questioned the US airstrikes on the jihadists:

Are Americans afraid of giving casualties on the ground in Iraq? Are they afraid of their soldiers being killed in the fight they claim is against terrorism?

Maybe it is necessary for airstrikes in some conditions and some circumstances,” he added. “However, air strikes should take place with the permission of the people of that country and the government of that country.

Like Foreign Minister Zarif (see below), Rouhani said members of the coalition had helped create the Islamic State, providing weapons and training.

The Rouhani and Zarif statements appear to be part of a concerted PR offensive — aimed at both global and US audiences — to bring Iran into the international plans to confront the Islamic State, as well as to protect Iran’s position in Iraq and its support of the Assad regime in Syria.

Meanwhile, other regime officials continue to allege that Washington and other countries are still trying to use the Islamic State for their plots, such as the protection of Israel.

The Secretary of the Supreme National Security Council, Ali Shamkhani, declared on Wednesday:

The alliance of the [Islamic State] creators for confronting this terrorist group is an effort to forge safe borders for the Zionist regime rather than bring about regional stability and security for the oppressed people of the region….

If the promotional shows by the United States and its allies in the so-called fight against terrorism had resulted in any decisive outcome in this regard, there would have been no sign of terrorist acts today.

While Rouhani and Zarif implied that Iran had been excluded from the international coalition, Shamkhani — echoing the line of the Supreme Leader — said Tehran had been invited to join it.

He said the request came from the Danish Foreign Minister, who visited Tehran last week.

Shamkhani did not explain why Iran turned down the offer.

However, President Rouhani’s senior advisor Mohammad Baqer Nobakht offered the clue that Tehran believed the terms of joining the coalition put it in a subservient position to Washington: “Definitely, no one will approve that our military forces act under the US command.”

Nobakht declared, “We fulfill our duties vis-à-vis the Iraqi Kurdistan Region and also the Iraqi government, which is not understandable for the Americans because it is in line with our national interests.”

Foreign Minister Mohammad Javad Zarif, speaking to the US Council on Foreign Relations, has continued Iran’s assault on a US-led coalition in Iraq to challenge the Islamic State.

Zarif used more diplomatic tones than that of the Supreme Leader, Iranian officials, and the military — smiling and even drawing laughs from the American audience — but the message was the same:

I would call [Monday’s international conference] in Paris a “coalition of repenters”. Most of the participants in that meeting, in one form or another, provided support to ISIS in the course of its creation, upbringing, and expansion — creating a Frankenstein that came to haunt its creators.

Iran has been angered that the US vetoed its participation in the conference, and Zarif exalted Tehran’s “leading role” in confronting the “global threat” of the Islamic State:

We all need to be aware of how to deal with this issue. It will not be eradicated by aerial bombardment. We need new tools to deal with these new realities.