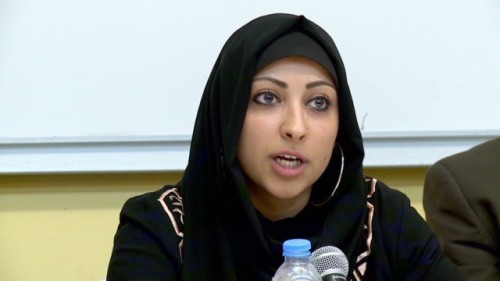 A Bahraini court has extended the imprisonment of prominent human rights activist Maryam AlKhawaja for another 10 days.

AlKhawaja, the co-director of the Gulf Center for Human Rights, was arrested as she arrived at Bahrain’s international airport on August 30. She was charged with allegedly assaulting a lieutenant and a policewoman after she refused to hand over her phone during a search.

The activist, who hold Danish-Bahraini nationality and has lived abroad for years, was returning to see her family — including her father, Bahrain Center for Human Rights founder Abdulhadi AlKhawaja, who has been sentenced to life in prison and started a hunger strike almost two weeks ago. Maryam AlKhawaja’s sister Zainab has also been arrested several times for dissent and was released from prison in February after almost a year behind bars.

Maryam AlKhawaja appeared in court on Saturday with her arm in a sling. She denied the charge and said the accusation was “vindictive and fabricated”.

If convicted, AlKhawaja faces a maximum of two years in jail.

On Friday, the UN called on Bahrain to release AlKhawaja and expressed concern about “ongoing violations” of freedom in the country.

Ravina Shamdasani, a spokeswoman for the UN High Commissioner for Human Rights, said the agency was “seriously concerned”: “We urge the government to take immediate steps to release Ms Khawaja and all human rights defenders and individuals detained for the peaceful exercise of their rights.”

The US State Department has also expressed concern and said it is closely following developments in the case.

The Bahraini authorities have imprisoned hundreds of activists and demonstrators since the start of mass protests for rights and reform in February 2011.