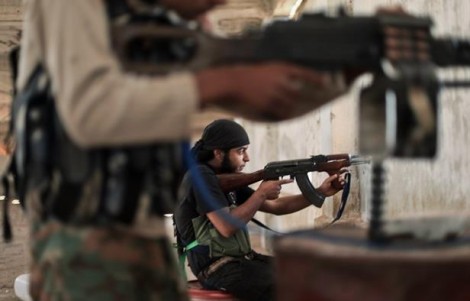 Following a series of quick victories by the jihadist Islamic State in northern Aleppo Province, insurgents are trying to establish a defense near the key town of Marea.

The jihadists reportedly took three more villages close to the town, even as the opposition tried to move in fighters from the west of Aleppo Province and neighboring Idlib Province.

Marea is a base for insurgent activity through northwest Syria. Last week the Islamic State closed on it as it captured the towns of Dabiq and Akhtarin.

Well-placed sources say that a unified insurgent command has been established by the Islamic Front, the Free Syrian Army, and Syrian Revolutionary Front. However, they warn that the opposition faces a lack of ammunition. Their fate may turn on a resolution of internal conflict — for example, “whether the SRF opens up its huge stockpiles of arms” — and on an increase of supplies from Turkey.

The Syrian National Coalition, the opposition organization based outside the country, echoed that assessment as it urged the international community to “quickly support the Free Syrian Army with weapons and ammunition” so it could “defend its people”. It went farther with a request on the community “to use the American air force, or those of any other country” to support the insurgents.

Claims are circulating on social media that the Syrian air force has defended the regime’s last remaining base in Raqqa Province in northern Syria with a series of strikes on Islamic State positions.

There are also assertions of Syrian aerial attacks further east in Deir Ez Zor Province. Claims range between a total of 84 and 122 strikes, including 26 on Islamic State bases in its stronghold of Raqqa city.

Insurgents continue to advance and attack, as they move within 3 kilometers of Hama Military Airport:

Mainstream media are circulating the unconfirmed assertion of a “monitoring group” that the Islamic State has executed 700 members of the al-Sheitat tribe, whom it defeated in fighting in eastern Syria last week.

The Syrian Observatory for Human Rights declared that 100 fighters and 600 civilians from the tribe were killed, with many of them beheaded, after the Islamic State quelled an uprising that started on July 30.

The Observatory cited “reliable resources” but offered no evidence for the claim, which is being headlined by Al Jazeera English.

Last week supporters of the Islamic State put out images of the jihadists executing more than 20 men in Deir Ez Zor Province, saying that most of them worked at an oilfield. The Observatory asserted that the men were members of al-Sheitat.

The Islamic State, which often hails — and sometimes exaggerates — executions, has made no reference to the killing of “hundreds” of tribesmen.

A series of tweets from journalist Harald Doornboos indicate how chatter on social media might have been the Observatory’s source:

Am speaking now from Donetsk via skype with Syrian friend in Turkey who is on phone with member AlSheeitat tribe on suspected ISIS-massacre.

Acc to member of Al-Sheeitat-tribe over phone: "500 ppl of tribe killed by ISIS, near Deir ezZur. Many others still in ISIS captivity." >

> Acc to source: ISIS then executed Tunisian rapist in village of Bal3oom. But bad relations between Sunni tribe &ISIS erupted in fighting>

1000s of members of Al-Sheeitat tribe fled area, some hiding in Deir ez-Zur, others made it to Turkey. Ppl who stayed behind killed by ISIS>

Last tweets regarding alleged ISIS-massacre are based on information from member of Al-Sheeitat tribe, so it is only one side of the story.<