Syria Daily, August 7: The Insurgent Crackdown on Crime & Corruption in the Northwest 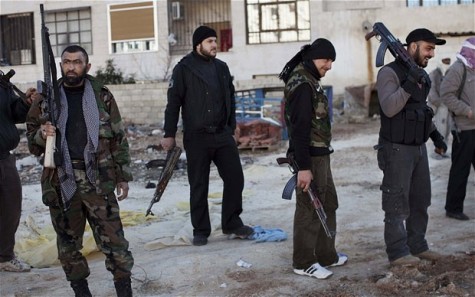 The Supreme Military Council confirmed on Wednesday that units of the Free Syrian Army have begun an operation to crack down on “wanted, corrupt individuals” in insurgent-held northwest Syria:

Upon receiving direction from the Sharia Court, the Security Committee and the Military Council, all of the military factions will pursue wanted figures according to law, and will hand them over to justice. A few have been arrested and the search is on for the rest. We have accurately collected some information along with conclusive evidence before carrying out this campaign, which will be beneficial for Maarat an-Numan citizens.

The FSA forces join those of the Islamic Front and the Islamist faction Jabhat al-Nusra in pursuit of suspected criminals who will be tried in Sharia court.

The insurgents are hoping to break up gangs in Idlib and Aleppo Provinces who have long been accused of theft and kidnappings. In addition, the opposition forces are implicitly trying to deal with some elements of the insurgency who have been accused of seizing money, weapons, and supplies.

The anti-corruption effort has been mis-reported, including by a leading “monitoring group”, as an offensive by Jabhat al-Nusra against other insurgent factions to take over villages in the northwest.

The Islamist faction Jabhat al-Nusra has withdrawn from Lebanon’s Bekaa Valley, near the border town of Arsal, and — while distancing itself from fighting with the Lebanese Army — given information about the start of the clashes on Saturday.

Jabhat al-Nusra said it was moving back across the border after a deal with Lebanese forces: “When they promised not to harm any of our people, the civilians in Arsal, we agreed to leave.”

The faction said it had released six Lebanese security personnel, captured last weekend, as “a gesture of good intention” and “the remaining prisoners have a special status”.

At least 16 Lebanese troops have been killed in fighting with gunmen in Arsal and more than 30 security personnel were captured.

Jabhat al-Nusra said the fighting, which has also slain at least 50 gunmen and scores of civilians, was started by a rogue group without authorization.

A faction struck one of the checkpoints in Arsal because of the arrest of Ahmad Jumaa, who recently pledged allegiance to the Islamic State in the Qalamoun (region of Syria).

“It is now subject to a joint sharia court, and the IS in the Qalamoun has disavowed itself of (the) action.

Insurgents have launched a significant attack upon Damascus International Airport, seeking to encircle it.

Jaish al-Islam (Army of Islam) say the offensive began Wednesday evening and seeks to take the airport — which brings in foreign fighters and Iranian support — and nearby towns such as Ghazlania and Hatitat Alturkman.

Jaish al-Islam claims it has already taken positions near Ghazlania’s mills, just to the west of the airport (see map). It claims that it has destroyed regime bunkers, fortifications, and a tank and killed dozens of troops.

The Islamic State is claiming that it has killed more than 300 regime troops and captured more than 100 as it overran the Brigade 93 base near Raqqa (see earlier entry).

Gruesome video has been posted of jihadists decapitating the bodies of slain soldiers.

Confirming reports posted by EA on , the charred bodies of more than 30 victims — killed by the Lebanese Army’s artillery — have been found at a Syrian refugee camp near the border town of Arsal.

A security source said police counted the bodies at an “informal” refugee camp near Wadi Hameid, on the outskirts of Arsal.

The Army hit refugee camps, setting tents ablaze, as it fought gunmen in the town.

Meanwhile, Lebanese officials said Islamic State jihadists finally withdrew from Arsal after a 90-minute clash with the Army that ended shortly after midnight.

Islamic State: We Captured Part of Major Regime Base Near Raqqa

The jihadist Islamic State is claiming that it has captured the northern part of the Brigade 93 base near Raqqa.

The Islamic State launched the offensive with a suicide truck bomb against the entrance of the base, following up with Grad rocket attacks.

Since it ended a non-aggression arrangment with regime forces last month, the jihadists have scored a series of victories in northern, eastern, and central Syria. They have ransacked one of the largest gasfields in Syria and captured the Regime 121 base, also near Raqqa. 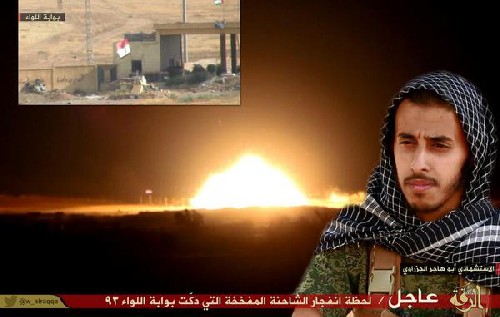 Insurgent Leader: Hezbollah Set Up Deadly Clashes in and Near Lebanese Border Town of Arsal

Amid attempts to end the fighting between the Lebanese Army and gunmen — suspected of being Islamic State jihadists — in Arsal on the Syrian border, insurgent leader Mohammad Alloush has alleged that Hezbollah set up the clashes that have killed at least 17 soldiers, 50 gunmen, and scores of civilians.

Alloush, a leading figure in the Islamic Front, claimed that Imad Ahmad Jumaa — whose detention by Lebanese forces sparked the fighting on Saturday — is really a Hezbollah agent who infiltrated the Islamic State and ensured he was arrested to provoke the jihadists to attempt to free him.

Lebanese security officials said at the time of the arrest that Jumaa belonged to the Islamist faction Jabhat al-Nusra, a claim denied by the group. Gunmen subsequently attacked a checkpoint, killing two soldiers, and raided a police station in search of the detainee.

Meanwhile in Arsal, a ceasefire was extended on Wednesday after clashes had threatened to end it earlier in the day. A mediation team said efforts were continuing for the full withdrawal of gunmen from Arsal and the release of more than 30 Lebanese soldiers and policemen who have been captured and possibly taken across the Syrian border.