Iraq Feature: The Yazidis Threatened With “Death by Thirst” By Islamic State Advance 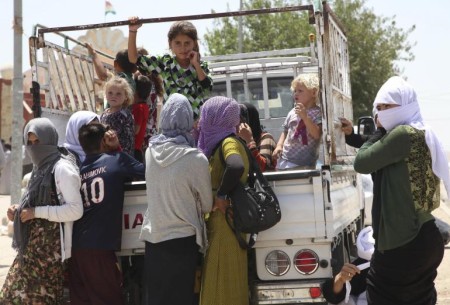 Humanitarian agencies say up to 40,000 Yazidis — a faith blending ancient Zoroastrianism with Christianity and Islam — are threatened with death, including by thirst, after they were forced from their homes by the advance of the jihadist Islamic State in northwest Iraq.

The Yazidis are considered apostates by the Islamic State, which took the city of Sinjar from Kurdish forces earlier this week.

Up to 200,000 people fled the city, many of them going into the barren Mount Sinjar.

Families say they have buried young and elderly victims of the harsh conditions in shallow graves, as Iraqi Government planes struggled to airdrop bottled water onto the mountainside.

“There are children dying on the mountain, on the roads,” said Marzio Babille, the Iraq representative for the United Nations Children’s Fund (UNICEF). “There is no water, there is no vegetation, they are completely cut off and surrounded by Islamic State. It’s a disaster, a total disaster.”

UNICEF said that 40 children among the evacuees had died in the 48 hours ending Monday night. On Tuesday, 12 people — including 10 children and an elderly woman — perished, according to a man trapped on the mountain with his mother, sister, and four brothers.

A Yazidi politician made an emotional appeal in Parliament, breaking down in tears as she pleaded for the Government and international community to help: “We are being slaughtered, our entire religion is being wiped off the face of the earth. I am begging you, in the name of humanity.”

Vian Dakhil said 70 children and 30 elderly had died of thirst, with 500 Yazidi men killed by the Islamic State and their women enslaved as “war booty”.