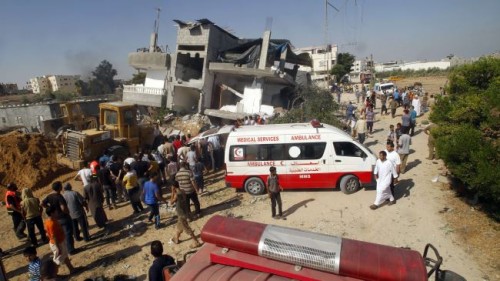 PHOTO: Destruction in Rafah on Friday

UPDATE 1640 GMT: Reports are piling up that Israel will unilaterally withdraw from Gaza within days, rather than risk a negotiated ceasefire which recognizes any of Hamas’s political conditions.

An unspecified number of IDF troops are pulling back from positions in the Gaza Strip and taking up posts just on the Israeli side of the border, according to Israeli media.

Troops have reportedly withdrawn from Khan Yunis in the south and Beit Lahiya in the north of Gaza.

Earlier, General Yoav Mordechai, Israel’s Coordinator for the Occupied Territories, said
residents of the northern district of the Gaza Strip would be allowed to return to their homes for the first time since the Israeli ground invasion on July 17.

UPDATE 1610 GMT: Israel claims that it has evidence that almost half of slain Gazans were fighters.

“There is research being done in the military, very professionally and reliably, (whose) conclusion is that at least 47% of the fatalities are terrorists, with photographs and names,” Deputy Foreign Minister Tzachi Hanegbi said on Channel 2, adding that the data would be presented to investigators.

Gazan officials, doctors, and human rights activists say at least 80% of the 1,669 Palestinians killed have been non-combatants, including hundreds of children.

The UN children’s agency UNICEF said on Saturday that it had confirmed the deaths of 296 children — 203 of them under the age of 12.

UPDATE 1550 GMT: Senior officials have confirmed Israel’s decision not to attend talks in Egypt seeking a ceasefire, saying the Security Cabinet made the decision after a five-hour meeting Friday night.

Instead, the Cabinet agreed that Israel will consider ending the operation unilaterally and withdrawing its forces from Gaza, having restored “deterrence”.

If we feel that deterrence has been achieved we’ll leave the Strip based on the principle of calm for calm.

If we feel deterrence has not yet been achieved, we’ll continue the operation in the Gaza Strip, or leave and press on with aerial strikes.

The officials said Israel will also seek to reach understandings with Egypt, Palestinian President Mahmoud Abbas, and the international community — but not Hama — over the reconstruction of Gaza, demilitarizing the territory, and supervising goods entering the Strip.

UPDATE 1100 GMT: The chief negotiator for the Palestinian Authority, Saeb Erekat, has said that a Palestinian delegation — including Hamas will travel to Cairo this evening for talks despite the collapse of the 72-hour cease-fire.

Erekat expressed hope that Secretary of State John Kerry will convince Israel to send negotiators to Egypt to presents its demands, “including the matter of the missing soldier”.

However, the Israelis have said they will not attend the talks:

Israeli official: We are not sending a delegation for talks in Cairo. No point in talking to Hamas about a ceasefire anymore

Egyptian President Abdul Fattah El-Sisi has pushed Egypt’s plan, which has been supported by Israel: “The Egyptian proposal is the real chance to find a solution to the crisis in Gaza and to end the bloodshed.”

UPDATE 1030 GMT: The Israel Defense Forces say they have struck more than 200 “terror targets” in Gaza in 24 hours, including a “weapons development center” located in the Islamic University.

What's left of the Islamic university after it was hit in gaza city last night. pic.twitter.com/yPbIX68RU1

UPDATE 1010 GMT: The Times of Israel has apologized for publishing a column by an American Jewish activist which asked if genocide of Gazans was appropriate in the crisis.

We will not countenance blog posts that incite to violence or criminal acts. http://t.co/z2mLreQV6J

The Times said that the opinion piece by Yochanan Gordon, headlined “When Genocide is Permissible”, was “damnable and ignorant” and “blatantly breached The Times of Israel’s editorial guidelines”.

The site said it “maintains an open blog platform: once we have accepted bloggers, we allow them to post their own items”. Gordon’s column has been discontinued, it said.

The Times of Israel has not removed another blogger’s column from Friday which invoked an Old Testament scripture about “extermination” and argued, “To destroy Hamas utterly, we cannot stop this war until they unconditionally surrender, even if it means making the war more horrific for the people of Gaza.”

Gordon has issued his own apology in the New York newspaper run by his father, which continued to headline the column several hours after it was removed by the Times of Israel:

I never intended to call to harm any people although my words may have conveyed that message.

With that said I pray and hope for a quick peaceful end to the hostilities and that all people learn to coexist with each other in creating a better world for us all.

The blog A Paper Bird offers a thoughtful and informative consideration of the episode and implications:

UPDATE 1010 GMT: A “senior Israel Defense Forces officer” said Saturday morning that the army is “very close to completing” the mission of destroying tunnels in Gaza, having demolished four in the last 24 hours.

“In the next 48 hours, we will continue in our efforts to do everything necessary to block the tunnels, and more decisions will be made as we progress,” the officer added.

The military said it struck 55 targets overnight, including five mosques which it said were being used as command centers by Gazan fighters.

Gaza’s death toll reached 1,600 on Friday, with the prospect of further killing after the collapse of a ceasefire within two hours.

The halt to fighting was supposed to begin at 8 a.m. (0500 GMT) but was immediately undermined by a clash between Gazan forces and the Israeli military as the latter tried to destroy a tunnel near Rafah.

Gazan fighters emerged from the tunnel, with one detonating a suicide explosive. In the subsequent fighting, two Israeli soldiers were killed and a third was captured.

The Israeli military responded with bombardment of east Rafah as it tried to find 2nd Lieutenant Hadar Goldin. At least 62 Gazans were killed. Later in the day, another 19 died in the south of the city.

Across the territory, more than 130 people were slain on Friday, bringing the death toll to 1,600, with about 8,750 wounded.

Palestinian officials said another 35 Gazans have been killed on Saturday morning, mainly in and near Rafah. Among the casualties were seven members of the same family.

However, international attention was on the captured Israeli soldier, with the US Government leading the condemnation of Gazan forces for the “outrageous” breaking of the ceasefire and demands for the release of Goldin: “The international community must now redouble its efforts to end the tunnel and rocket attacks by Hamas terrorists on Israel.”

Later in the day, President Obama tried to put some balance into the American statements. After repeating the “unequivocal condemnation” of Hamas, he said, “Innocent civilians in Gaza caught in the crossfire have to weigh on our conscience and we have to do more to protect them.”

Hamas’ political leadership tried to distance itself from Goldin’s capture, saying it had no knowledge before passing responsibility to its armed branch, the Al Qassam Brigades, “Even if it was true, the military leadership are the only ones authorized to report such an event.”

The Brigades said early Saturday morning that they believe Goldin may have been captured but was killed in the subsequent Israeli attacks: “We lost contact with the group of combatants that took part in the ambush, and we believe they were all killed in the bombardment. Assuming that they managed to abduct the soldier during combat, we assess that he was also killed in the incident.”

The deaths of the two Israeli soldiers brought the toll to 63 since the ground invasion on July 17. Two Israeli civilians and a Thai worker have been killed by Gazan rockets since the start of the 25-day war.

There were also casualties in the West Bank on Friday amid rising tension and protests. Two Palestinians were killed and scores were wounded in demonstrations across the area, as Israeli forces fired rubber-coated steel bullets in clashes.