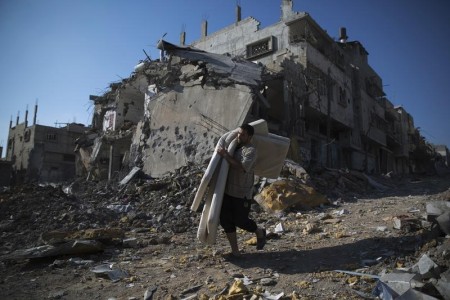 LATEST: UN — Gazans “Will Not See Improvement for 15 Years” Unless Blockade Lifted

The ceasefire was broken by three rockets fired at Be’er Sheva, with later rockets reported near Eshkol and in Sdet Negev and two more intercepted over Netivot.

The breach was followed quickly by Israeli Prime Minister Benjamin Netanyahu’s order to retaliate with airstrikes. The Israeli Defense Forces hit 10 targets, including sites in Beit Lahiya in northern Gaza Strip and in al-Maghazi in the center.

Netanyahu and Defense Minister Moshe Ya’alon then withdrew the Israeli delegation from talks in Cairo.

Hamas spokesperson Sami Abu Zuhri said the organization has “no knowledge of rocket fire from the territory of the Gaza Strip” and blamed Israel for “attacks intended to topple the negotiations in Cairo”.

Thousands of Gazans have fled their homes in anticipation of more strikes, joining the more than 200,000 who are still displaced by the 42-day war.

Israel and Palestine agreed late Monday to a 24-hour extension of a temporary ceasefire, but talks in Cairo made no advance to a resolution of the 42-day Gaza War.

The announcement of the extension came just before the expiry of a five-day halt to the fighting. It came at the end of another day of discussion of an Egyptian proposal, tabled last Friday, which would ease some of the provisions of the Israeli blockade on Gaza, end an Israeli buffer zone in northern and eastern Gaza by January, and establish a fishing zone off the Gazan coast — but only through cooperation between Israel and the Palestinian Authority, not Hamas.

The most significant development, away from the negotiations in Cairo, was either a confirmation or an Israeli psychological operation that Hamas and the Palestinian Authority could not remain partners, even in the same Palestinian delegation.

The Israeli intelligence agency Shin Bet claimed that Hamas members in the West Bank, directed by the organization’s leadership in Turkey, were plotting to overthrow the Authority and its leader Mahmoud Abbas. The plan supposedly included a series of attacks on Israel to destabilize the security situation.

Shin Bet has arrested 93 members, transferring 46 for interrogation, as it claimed it found 600,000 Israeli shekels ($170,000), 24 rifles, six pistols, seven rocket launchers, a large amount of ammunition, and a getaway car.

The Gazan death toll passed 2,000 on Monday, as more bodies were retrieved and more victims died of their wounds. The Health Ministry put the total at 2,016, with at least 10,193 Gazans wounded.

UN: Gazans “Will Not See Improvement for 15 Years” Unless Blockade Lifted

The head of a UN relief agency has warned Gazas will not see any improvement in their lives for at least 15 years unless the Israeli and Egyptian blockade of the territory is lifted.

“The question will be, is it a ceasefire that brings us simply back to the pre-existing condition under the blockade?” Pierre Krahenbuhl, the head of the United Nations Relief and Works Agency. “If that is the case, it will take years and years and years to rebuild.”

An Egyptian proposal under discussion in indirect talks reportedly allows for some easing of the blockade, but only if Egypt, Israel, and the Palestinian Authority — and not the Gazan leadership of Hamas — handle the arrangements.