Gaza Daily, August 16: An 11-Point Proposal But No Sign of Agreement to End War 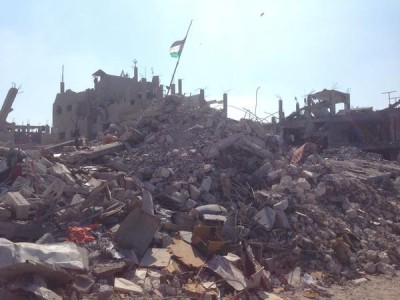 LATEST: Israel Arrests 350 Protesters Since Early July — “None Are Jewish”

An 11-point Egyptian proposal has been tabled to end the 39-day Gaza War, but its acceptance by both Israel and the Gazan leadership of Hamas is not in sight.

The initiative proposed the lifting of the eight-year Israeli blockade on Gaza. However, the removal of the siege is contingent on Israeli and Egyptian forces supervising movement of supplies on their sides of Gaza’s borders, and on the Palestinian Authority overseeing the Gaza side.

That would effectively reinstitute the Fatah Party, defeated by Hamas in elections and armed clashes in 2006-7, as the dominant power in Gaza.

There were conflicting reports overnight of whether Hamas would accept the terms. One unnamed Hamas official was quoted as saying the faction and the Palestinian delegation had all but accepted the offer, even though the terms gave Israel “the upper hand”.

However, another official reportedly said that the plan “doesn’t give Hamas a thing”:

The proposed agreement states in many places that lifting the blockade will come through measures and mechanisms agreed upon between Israel and the Palestinian Authority, and this means Israel will always have the upper hand, and might return the situation on the crossings back to the way it used to be before the war.

The plan, in a leaked document published by the Egyptian paper al-Shorouk, provides for reconstruction of Gaza — estimated to cost billions of dollars after the destruction of the war — although this would be coordinated between Israel and the Palestinian Authority, not Hamas. Authority forces would also be deployed in Israeli buffer zones that would be eliminated in the northern and eastern Gaza by January 1, and they would work with Israel in the establishment of a six-mile fishing zone, to be gradually extended to 12 miles.

The proposals defer the issue of a seaport or airport for the territory.

Both sides returned to their home capitals on Friday for consultations.

A five-day ceasefire, which began on Thursday, held yesterday.

Israel Arrests 350 Protesters Since Early July — “None Are Jewish”

Haaretz headlines, “Israeli Police’s War against Arab Protesters“. It adds, “None Are Jewish”.

Israeli security forces have clashed repeatedly with protesters in the West Bank since the start of the Gaza War on July 8. Several people, include an 11-year-old bystander, have been killed in the fighting.