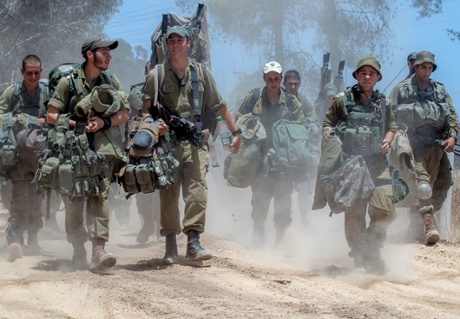 UPDATE 1735 GMT: Israeli officials have finally disclosed casualties from the clash with Gazan fighters who got into Israel in the western Negev desert.

Two Israeli soldiers, a major and a sergeant, were killed and two were wounded.

Four or five Palestinians crossed the border and fired an anti-tank missile at the Israeli unit.

Most of those slain were in eastern Gazan, where the Israeli invasion force has concentrated tanks.

At 333 people have been killed in Gaza by Israeli air and ground attacks since July 8. The dead include 77 children, 24 women and 18 senior citizens. More than 2,385 people have been injured.

An Israeli man has been killed in a rocket strike on a bedouin community near Dimona in the Negev desert. Four family members were wounded, including a seriously-injured three-month-old girl.

Gazan fighters breached the Israeli border in the western Negev desert. An undisclosed number of Israeli troops have been hurt, and one Palestinian was killed.

Three other Israeli soldiers were injured in fighting in central Gaza.

Occupants of the al-Bureij refugee camp in central Gaza, which has many people displaced by the threat of Israeli attacks, received recorded phone messages from the Israel Defense Force on Saturday morning, instructing them to evacuate to the main north-south artery of the Strip.

A resident of the camp said most people are not inclined to leave. “In Deir al-Balah they bombed a civilian car and its passengers were killed. There is no place that is safe. If we’re forced to choose whether to die as we flee or die at home –– we prefer to die at home.”

Egyptian soldiers in north Sinai have prevented an aid convoy of activists from reaching the Rafah border crossing with Gaza.

An army officer at the Balloza checkpoint on the desert highway to Rafah said the situation was too unstable to allow the convoy of 11 buses and 500 activists to pass.

UPDATE 1015 GMT: Israeli media are reporting that one Israeli man was killed and four injured by a rocket strike on a Bedouin community near Dimona, in the Negev desert.

UPDATE 0945 GMT: Reports are circulating of Israeli casualties in fighting inside Israel near the Gaza border:

A number of Israeli soldiers have been injured in clashes with fighters from Gaza this morning. Being evacuated to local hospitals.

Israeli censors are imposing a blackout over the incident.

There is a situation ongoing at Kibbutz Beeri, near central Gaza border. Still under IDF censor.

Roads and areas near Eshkol and Ashkelon have been closed by the Israel Defense Force.

UPDATE 0940 GMT: The number of Gazans leaving their homes and seeking emergency shelter continues to rise:

More than 50,000 displaced Palestinians are seeking shelter in UNRWA schools in #Gaza – equal to the peak number from the 2008/9 conflict.

Israel is backing an Egyptian proposal for a pause in firing, followed by a longer-term ceasefire; however, the Gazan leadership of Hamas has objected that it has not been consulted in the drafting of the initiative and that it does not deal with any substantive issues.

Egyptian Foreign Minister Sameh Shukri repeated this morning, after a meeting with his French colleague on Saturday, that Cairo has no plans to revise the proposal.

Meanwhile, Hamas and Islamic Jihad have tabled a proposal for a 10-year ceasefire which requires an end to the Israeli blockade of Gaza and the release of detainees seized in the West Bank.

Islamic Jihad said on Friday, “All options are open in the Gaza Strip, as the battle could last long and we should prepare for that if the enemy does not comply with our demands.”

At least 20 Gazans were killed on Saturday morning.

Israel’s official line, set in part to satisfy the US request for “precise operations”, is that its ground assault is to destroy tunnels from Gaza under the border.

In the first day of operations, Israeli troops and tanks advanced only a small distance into Gaza. The priority was on artillery fire to level targets.

Netanyahu’s announcement indicated that those troops could move further into the territory. He rebutted charges of disproportionate action and mass killings: “The IDF (Israel Defense Force) is a moral army like no other. Those responsible for the damage to uninvolved civilians are the Hamas, and Hamas alone, who use civilians as human shields.”

However, about 80% of the dead and almost 2,300 injured are civilians, according to United Nations officials, non-government organizations, and Palestinian groups. The death toll includes 72 children, 24 women, and 18 elderly.

Two Israelis have died since the escalation in clashes on July 8. One was a soldier killed by friendly fire during the opening hours of the ground invasion.

Three Israeli soldiers were hurt in a clash in northern Gaza overnight.

Despite pressure from the United Nations and the European Union on Israel to pull back, as well as on the Gazan leadership of Hamas to stop rocket fire into Israel, the US effectively endorsed Netanyahu’s measures on Friday.

President Obama said, after a phone conversation with Netanyahu, that he hoped West Jerusalem would “limit civilian casualties”. However, his fundamental line was “I reaffirm my strong support for Israel’s right to defend itself”.

At the emergency session of the UN Security Council, Ambassador Samantha Power blamed Hamas for the deaths in Gaza, “A cessation of violence would have offered both sides a chance for peace, but Hamas continued to fire rockets.”