Iraq Daily, July 1: The Front Lines Settle in the Conflict 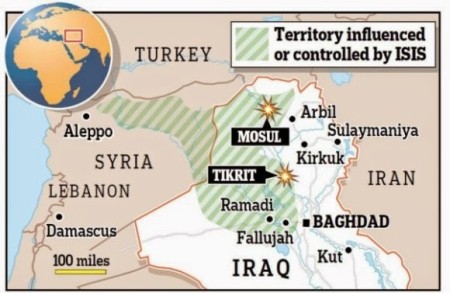 LATEST: Ban Lifted on Much of Social Media

Monday was the quietest day in Iraq since the insurgent takeover of Mosul and Tikrit three weeks ago. In contrast to the political flurry over the declaration of a Caliphate by the Islamic State, there was little movement on the military front lines.

Iraqi forces appear to have been checked in their attempt to retake Tikrit, 85 miles north of Baghdad, after its seizure by insurgents on June 11. While fighting continued on the southern outskirts of the city, Baghdad’s troops had been pushed out of the center after the air-drop of snipers and special forces last Thursday.

Insurgents also seem to have settled their lines in the three-front advance towards Baghdad: to the north, outside the city of Samarra, 70 miles away; to the northeast, outside Diyala Province’s capital Baquba, 40 miles from Baghdad; and to the west in Haditha, 60 miles away.

The day’s chief announcement from Washington, which has been cautious in its commitment to Baghdad — particularly while Prime Minister Nuri al-Maliki remains in power and shows no sign of acceptance of a “unity” Government — was that 300 more troops would be despatched to protect the US Embassy.

The step is in addition to the 300 advisors and special forces promised by President Obama almost 200 weeks ago. About half the men deployed last week to Baghdad.

Ban Lifted on Much of Social Media

Baghdad has lifted a 17-day ban on social media, although about 20 news websites remain blocked.

The Iraqi Government purportedly imposed the restrictions to disrupt the communications of insurgents, soon after they took Mosul and Tikrit and moved on Baghdad.

News sites such as Al Jazeera and Al Arabiya are still blocked.

Claimed Message from Islamic State’s al-Baghdadi to Muslims: “You Will Own the World”

A claimed message from Islamic State leader Abu Bakr al-Baghdadi, his first since the declaration of a Caliphate, calls on Muslims to right the wrongs committed against them throughout the world:

The ummah of Islam is watching your jihad with eyes of hope, and indeed you have brothers in many parts of the world being inflicted with the worst kinds of torture. Their honor is being violated. Their blood is being spilled. Prisoners are moaning and crying for help. Orphans and widows are complaining of their plight. Women who have lost their children are weeping. Masājid (mosques) are desecrated and sanctities are violated. Muslims’ rights are forcibly seized in China, India, Palestine, Somalia, the Arabian Peninsula, the Caucasus, Shām (the Levant), Egypt, Iraq, Indonesia, Afghanistan, the Philippines, Ahvaz, Iran, Pakistan, Tunisia, Libya, Algeria and Morocco, in the East and in the West….

Declaring a “new era”, al-Baghdadi says the Muslims can now reverse their defeats after the fall of their last Caliphate: “Rush O Muslims to your state. Yes, it is your state. Rush, because Syria is not for the Syrians,
and Iraq is not for the Iraqis. The earth is Allah’s.”

Al-Baghdadi concludes with sentences that are captivating Western media, to the exclusion of the rest of the message: “This is my advice to you. If you hold to it, you will conquer Rome and own the world, if Allah wills.”

Massoud Barzani, the President of Iraqi Kurdistan, has told the BBC that he intends to hold a referendum on independence within months.

The President said independence was the “rights” of the Kurds.

Barzani responded to claims that he was breaking up Iraq by saying the country is already “effectively partitioned”.

Parliament has made a far-from-auspicious start in the attempt to form a unity Government and check the insurgency. CNN’s Arwa Damon summarizes:

#iraq parliament 1st session of 3rd term convened & post phoned 4 one wk. So much for urgency w/all that is riding on politics and "unity"

Only 75 of the 165 MPs needed for a quorum were present, after Kurdish and Sunni Arab legislators did not return to the chamber after a break. 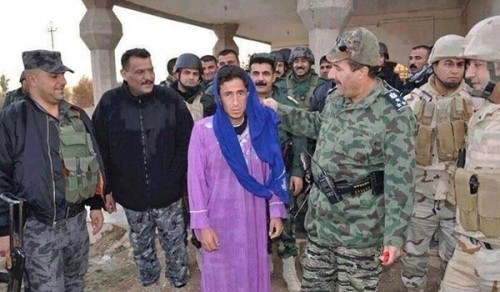 The website cites the head of the Council of Salaheddin Province, Ahmed Al-Karim, who adds, “The Islamic State is a terrorist group supported by some regional countries and it is just trying to create a chaotic atmosphere in the region.”

Insurgents, including the Islamic State, repelled an assault by Iraqi forces on Tikrit — taken by the insurgency on June 11 — although fighting continues on the southern outskirts of the city.

Russian forces oversee the unloading of a Sukhoi SU-25 fighter jet from a cargo plane at the al-Muthanna military airport in Baghdad: 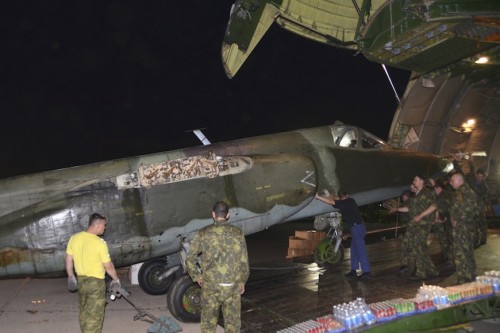