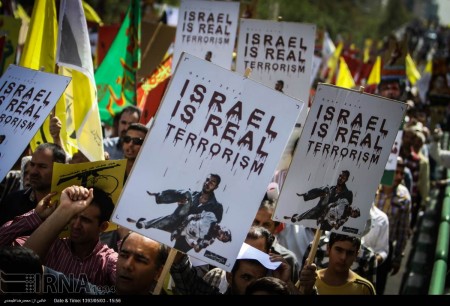 The head of the Basij militia, Mohammad Reza Naqdi, led the rhetorical charge: “The government should use this huge capacity and popular backup for defending the oppressed people and pave the ground for supporting the oppressed Palestinians.”

He continued with a blast against Washington, “The bloody Ramadan in Gaza unveiled the US human rights (fraud). The US regime which is all made of betrayal and brutality has approved $225 million for supporting the ominous Zionist regime’s killing of the children and women.”

The commander of Iran’s ground, General Ahmed Reza Pourdastan, repeated this week’s call by the Supreme Leader to give weapons to Palestinians in the West Bank as well as Gaza: “It is the responsibility of all Muslim states, and those who are worried about the religion, to arm the people in the West Bank so that the Muslim Palestinian nation can resist against the Zionist regime.”

Pourdastan declared, “We are witnessing that the rockets fired by the Palestinians have made this (Zionist) regime feel much fear, which shows that this fake regime withdraws and comes to the negotiating table by using force.”

Deputy Foreign Hossein Amir Abdollahian was more restrained as he met the Lebanese Foreign Minister in Beirut, “We are surprised at the suspicious silence of certain countries on the Zionist regime’s attacks against the Gaza Strip and stress that certainly, Israel is the main and big loser of the current war on Gaza.”