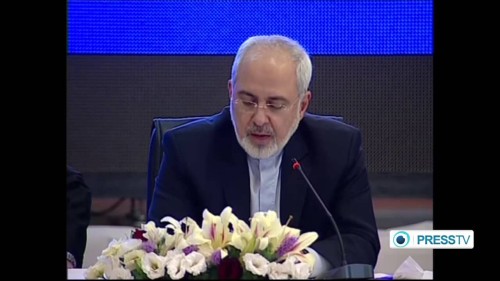 This morning’s headlines in Iran are dominated by the Israel-Gaza conflict, as the regime presses for political influence in the two-week war.

President Rouhani led the effort on Tuesday, calling for a mass turnout in rallies on Friday:

The larger turnout on Quds Day this year, the greater support will be expressed for oppressed people of Palestine. The presence of the people will show the world that oppression and occupation is never permanent, and that any nation that fights for freedom will eventually be victorious.

Foreign Minister Mohammad Javad Zarif told a meeting of the Organization of Islamic Cooperation in Tehran that Israel had blatantly violated international human rights law as it sought the “blind genocide” of the Palestinian people: “The Zionist regime used the most advanced armaments and flagrantly carried out ground, air and sea aggression on the Palestinian land.”

Parliamentarians from 10 Islamic states, in a session chaired by Iran’s Speaker of Parliament Ali Larijani, declared, “The Zionist regime’s military invasion of the Gaza Strip is the flagrant manifestation of genocide, oppression and intentional destruction of infrastructure, in which hundreds of defenseless civilians including children, women and elderly, have been martyred and thousands of others wounded.”

Deputy Foreign Minister Hossein Amir-Abdollahian, meeting Qatar’s Assistant Foreign Minister in the Iranian capital, insisted that Israel will be the “absolute loser” of the conflict with Gaza.

Qatar has brokered meetings of leaders of the Palestinian Authority and Hamas, putting forth a ceasefire proposal which calls for an end to the Israeli blockade of Gaza and the freeing of Palestinian detainees from Israeli prisons.

Confusion Over Size of Unfrozen Assets

According to Foreign Ministry spokeswoman Marzieh Afkham the final installment of frozen assets has been released taking the total to $4.2 billion, less than the $7 billion estimated by the Obama administration.

Both figures contrast with the $11 billion alleged by the Foundation of Defense of Democracies (FDD), which New York-based journalist Ali Gharib has labelled the result of “fuzzy math.”

Gharib notes the fluctuating nature of FDD’s figures in the months following the agreement and writes: “Now that the first six months of the interim agreement has run its course, [FDD’s executive director, Mark] Dubowitz revised his numbers downward by nearly half, to the $11 billion figure for direct sanctions relief.” When asked about the discrepancy on Twitter, he deflected by claiming the distinction between direct and indirect relief — one he’d readily made in November, with inflated numbers — was “artificial.”

The confusion in defining direct and indirect relief, Gharib argues, needs to be considered into the $11 billion number: “For instance, in his recent analysis, Dubowitz includes the profits Iran has reaped from its sale of condensates, a liquid product formed when certain types of natural gas are pumped to the surface. FDD estimates that condensates accounted for about $5 billion of Iranian exports, a figure that was lumped into the $11 billion in direct relief.”

As Tehran continues its push for influence in the Israel-Gaza War, national security official Alaeddin Boroujerdi has declared Iran’s hospitals are willing to admit Palestinians injured from the conflict in Gaza.

Boroujerdi stated his full support for Palestinians on Tuesday during an emergency meeting of the Organization of Islamic Cooperation (OIC) Inter-Parliamentary Union in Tehran. He added that Iranian medical services would be made available to Gazans.

Boroujerdi also referenced Egypt’s decision to close off the Rafah border – an essential means of providing Gazans with medical care: “We announce officially to Egypt our readiness for sending humanitarian and medical supplies to Gaza through Iran Red Crescent Society.”

Iranian protesters yesterday assembled in Tehran to rally against the Egyptian government’s decision to close the Rafah border leading to Gaza. It is claimed that Egypt’s decision prevents injured Palestinians from fleeing the area to seek medical assistance and that it denies medical teams the right to enter the region to help the injured.

According to Press TV, the protesters marched out of solidarity with oppressed Palestinians and that, upon concluding the march, they issued a statement expressing regret that other countries in the Middle East, such as Egypt, have done little to aid Palestinians. The statement also denounced the Israeli regime for alleged war crimes and criticised other Western nations, such as the US, and international bodies for enabling the attacks on Gaza – which have now been said to have resulted in a death toll exceeding 500 Palestinians.

Speaker of Parliament Ali Larijani called on Cairo to open the border as a humanitarian gesture, saying, “Today is a historic moment for Egypt and its government. They are responsible for determining what role they want to play in the third war against Gaza.”

Zarif to MPs: Hope for Comprehensive Nuclear Deal by November

Foreign Minister Mohammad Javad Zarif told MPs in a closed-door session on Tuesday that he is hopeful Iran and the 5+1 Powers will be able to reach a comprehensive nuclear deal before a deadline of November 24.

The two sides adjourned talks on Friday in Vienna, after 16 days failed to bridge gaps on Iran’s enrichment of uranium, the status of its facilities, and the lifting of US-led sanctions. They agreed to extend an interim deal by four months to allow time for further negotiations.

According to MP Alireza Monadi Sepidan, the Foreign Minister emphasized that the 5+1 Powers have recognized Iran’s right to enrich uranium for peaceful purposes, although he said discussions continued on the number of Iranian centrifuges.

Zarif said later on State TV, “The issues raised by the 5+1 Powers about the number of centrifuges are baseless and equally devoid of rationality.”