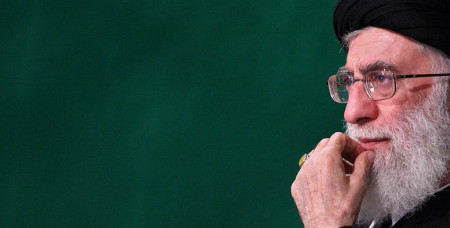 With the election of President Rouhani last year, speculation rose that opposition leaders Mir Hossein Mousavi, Mehdi Karroubi, and Zahra Rahnavard would soon be released. Rouhani had promised freedom for political prisoners, and his supporters had invoked the cases of Mousavi and Karroubi, both of whom had challenged the “winner” Mahmoud Ahmadinejad in the disputed 2009 Presidential ballot, and who had been put under strict house arrest — along with Mousavi’s wife, activist and academic Rahnavard, amid regime worries over revived protests in February 2011.

Speculation has been followed by campaigning, including by some high-profile figures. Students have interrupted the regime’s gatherings with chants. Clerics such as Ayatollah Ali Mohammad Dastgheib have said the punishments are unjust. Former President Hashemi Rafsanjani appealed to the Supreme Leader.

Last month, MP Ali Motahari led a delegation telling Ayatollah Khamenei that the death of any of the opposition leaders would harm the image of the regime, both inside and outside Iran, and urging a fair trial for the detainees.

There is no sign, however, that the house arrests will be lifted. The Supreme Leader insisted that the trio had been treated well — far better than their stay in prison after their inevitable convictions in a trial — and that leniency would set a bad example:

We must not lose the path of the martyrs and the revolution. Their crimes are major and if it were up to Imam (Khomeini), they would have been confronted more severely.

Some outlets had suggested after Rafsanjani’s approach that the Supreme Leader had not rejected a change in status for the opposition leaders, asking that the matter be raised again after the culmination of a nuclear deal with the 5+1 Powers.

That possibility, if it existed, has evaporated. The line of the Supreme Leader, backed by officials like Iran Prosecutor General Gholam-Hossein Mohseni Ejei, is firm: unless the leaders publicly repent for their crimes of “sedition”, they will remain captives.

So why is Khamenei unyielding?

The explanation goes beyond the supposed crimes of Mousavi, Karroubi, and Rahnavard. It is even beyond the regime’s general fear of “sedition”.

The Supreme Leader is worried about his own position.

1. Hardliners, led by Ayatollah Mesbah Yazdi, and elements of the conservative Motalefeh Party

2. “Moderate Principlists”, under the leadership of Hashemi Rafsanjani, and supported by officials within the Rouhani Government

Each side has tried to increase its political power by winning the Supreme Leader’s support on key issues. Four have been — the nuclear talks, the economy, cultural policies, and the house arrests.

Over the past year, Khamenei has balanced the factions. While backing the Rouhani Government’s pursuit of a nuclear deal and its primacy on economic policy, he has sided with the hardliners on the cultural front. Those tough stances, including continuing crackdown on the media and warnings over “bad behavior” such as violation of rules on hijab, have extended to the question of political prisoners: since last autumn’s freeing of a group of detainees, there has been no easing of the sentences. Indeed, other journalists and activists have been put behind bars, while those inside have faced beatings from guards.

Hardliners used last month’s anniversary of the death of Ayatollah Khomeini to test the balance. Even as reformists and Rafsanjani were hoping that the occasion would bring a positive announcement about Mousavi and Karroubi, Ayatollah Ahmad Khatami was attacking President Rouhani and warning that the detained leaders were “guilty of betraying their country and spreading the lie of fraud”: “I am amazed that some people are trying to free them.”

Hardline MP Qasem Ravanbakhsh said he is ready to “put the noose around the necks” of the prisoners. MP Esmail Kouthari said they should be grateful they had been “forgiven” with house arrest; otherwise, they would have been executed. Asadollah Badamchian, the deputy leader of the Motalefeh Party, proclaimed, “Mousavi and Karroubi are the directors of the sedition who have fallen in the trap of America, England, and Israel.”

However, hardline rhetoric is not enough to explain the Supreme Leader’s position. He has not yielded to it on matters such as the nuclear issue, and he still faces the challenge from the other side: clerics have continued to question why Mousavi and Karroubi are being accused and held without trial — one Hojatoleslam said it is the accusers who should be punishers, while another threatened to release information about those accusers. A leading university professor and economist, Farshad Moment, said on live TV that Mousavi’s Prime Ministry marked the best economic period in the history of the Islamic Republic.

No, the reason behind the Supreme Leader’s intransigence lies in a change in the political situation.

Last month, Ayatollah Mahdavi Kani, the head of the Assembly of Experts, fell gravely ill with a heart attack. He remains in a coma in a Tehran hospital.

Mahdavi Kani’s condition and the rise of former President Hashemi Rafsanjani, the mentor of President Rouhani, raise the possibility that Rafsanjani — who led the Assembly from 2007 to 2011 — may reclaim the chair.

That shift would challenge Khamenei’s balance over his four key issues. Perhaps more importantly, it could give meaning to the Assembly’s stated duties of supervising the Supreme Leader’s activities and selecting his successor.

Rafsanjani has said in the past that other models for the leadership of the Islamic Republic should be considered. For example, a five-person “committee” of clerics could take on the role.

The former President, if he takes over as head of the Assembly, will not confront the Supreme Leader directly with this scenario. Even with his bolstered position alongside the Rouhani Government, a head-on battle is one that he is likely to lose.

However, he could use the possibility as leverage on an issue such as Mousavi and Karroubi’s future and, more generally, on the imprisonment of dissenters to quell legitimate questions.

That was the line that Rafsanjani took in his July 2009 Tehran Friday Prayer — the last one he was permitted to give — challenging the repression of demonstrations. He lost that battle, but he has not given up the war — last week, he indirectly responded to the Supreme Leader’s remarks: “Sedition is the result of injustice. Sedition is when some people use the Government’s facilities to affect an election.”

Perhaps the Supreme Leader at some point could have presented the lifting of house arrests as a sign of his benevolence towards those who had been misguided after the 2009 election. Now, however, the release of Mousavi, Karroubi, and Rahnavard might appear as a concession — indeed, a defeat — after years of condemnation of the “seditionists”.

Khamenei had been worried enough in spring 2013 for his office, via the Guardian Council, to block Rafsanjani’s candidacy for President. The unexpected victory of Rouhani — who was meant to be the less-prominent consolation candidate after Rafsanjani’s disqualification — led to an accommodation with the former President, but that is now being tested.

Last week the signs of a renewed battle were surfacing. The head of the Motalefeh Party, Mohammad Nabi Habibi, warned, “Unfortunately, Rafsanjani’s views are not coincident with the view of the Supreme Leader.” Prosecutors announced the start of the long-awaited trial of Rafsanjani’s son, Mehdi Hashemi, over charges of fraud and electoral manipulation.

Meanwhile, Mousavi, Karroubi, and Rahnavard enter the 42nd month of their detentions.